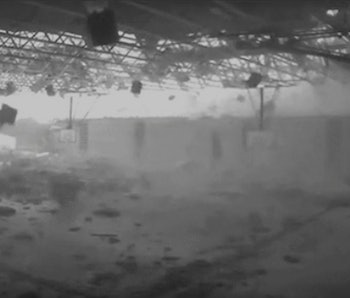 Tornado season typically runs between March to June in the United States, but 2018 has already seen a number of these deadly weather occurrences.

Just this weekend, tornadoes in three southern states have left four dead and displaced many more. These unseasonable appearances may be due to climate change, as a 2014 study published in Nature Climate Change, which Inverse previously covered, suggests.

Tornadoes are the result of warm, moist air near the earth’s surface meeting cool, dry air above during a (usually supercell) thunderstorm. They occur predominantly in the United States, which experiences approximately 1,200 tornadoes annually — about 4x as many as in Europe, according to the National Oceanic and Atmospheric Administration, which also call them “nature’s most violent storms.” Additionally, most occur east of the Rockies, as with the tornados that hit parts of Kentucky, Tennessee, and Arkansas this weekend.

Just in time for this earlier-than-usual start to tornado season, a video that has gone viral on Reddit since it was posted last year provides an awe-inspiring look at a tornado as it occurs — from the inside.

Taken from a stationary videocamera in the far corner of a school gymnasium, the video first shows the empty gym, where everything looks normal, except for a door that is flapping open. Then, the lights flicker and go off, and suddenly you can see a sliver of pale grey sky through a collapsed wall before the strong gusts blow dust throughout the space, and then, when it clears, you see that the exterior walls of the space are partially collapsed.

Incredibly, while there is debris on the floor, the speakers hanging from the ceilings are still in tact — though in some cases, swinging wildly. As some Redditers have humorously commented, “Whoever the sound guy was who hung those speakers did a one hell of a job.”

That might be the case (props to whomever the sound guy is, wherever he is!), but still, the video shows the incredible power of nature. If you’re in a tornado zone, the best place to take cover is to get as far away from windows as possible, ideally underground. This video of the gymnasium ripped apart by a tornado is proof of why. NOAA has more tips here.