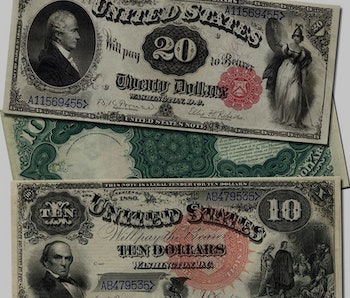 These days, the future of money is in question. Paper currency that has powered the world for centuries is under threat by by credit cards, digital wallets, payment apps, and — of course — cryptocurrency.

And yet, despite all the promise of new technologies for the future of money, cash isn’t going anywhere quite yet. Especially not American dollars, which have been the world’s reserve currency since 1944, as a result of the Bretton Woods Agreement. In fact, 65 percent of all dollars — about $580 billion in American bills — are used outside of the United States, including 75 percent of $100 bills, 55 percent of $50 bills and 60 percent of $20 bills.

But the world’s dominant reserve currency is actually pretty new. It was not until February 25, 1862 — with the passage of the Legal Tender Act that authorized — that paper money, in its (close to) modern form, was introduced to America.

Known as “greenbacks” for their front and back printing, designed to prevent counterfeiting, this paper money started out as promissory notes allowing the holder to eventually trade them in for gold or silver, or use them to pay customs duties to the U.S. government. In other words, the money itself had no inherent value but, rather, its value came in the trust that the U.S. government would keep its promise to pay back its debts.

Indeed, it was not until the 1930s, during the Great Depression, that the question of whether or not the United States should re-link its currency to the gold standard was finally fully resolved under President Franklin D. Roosevelt. The answer was…kind of, with the Gold Reserve Act setting the price of gold at $35 per ounce and forcing all private citizens to turn in their gold.

By the end of World War II, the United States held about 75 percent of the world’s gold stores, and the U.S. dollar became the world’s reserve currency.

So, on this 162nd birthday of the American dollar as we know it today, as the financial system is again undergoing massive changes, it’s worth remembering that once upon a time, fiat currency was the disrupter of the status quo.

It was the Civil War that forced change. President Abraham Lincoln and his Treasury Secretary, Samuel Chase, quickly realized that the war would be much more expensive than foreseen. Meanwhile, the national coffers were empty after decades of mismanaged finances so, after much debate, Chase introduced a paper currency whose value would not be tied to the price of gold. This is also known as a fiat. Thus, the “greenback” was born — though it was hotly contested before, during, and after its introduction, and the question of whether or not to return to the “gold standard” was a divisive issue that marked American politics for decades. (In 1900, the dollar and gold was relinked, but still, the debates continued.)

So, Roosevelt took action to prevent this with 1934’s Gold Reserve Act that set the price of gold at $35 per ounce and forced all private citizens to turn in their gold to the government. Because the act barred average Americans from buying gold, it was and was not a gold standard.

By the end of World War II, the United States held about 75 percent of the world’s gold stores, and so, as the war was winding down, world leaders chose the U.S. dollar as the world’s reserve currency. Today, it shares that distinction with the euro, the Japanese yen, and (as of December 2016), the Chinese renminbi. Still, of those, the U.S. dollar remains the strongest, with over 85 percent of foreign exchange trading being conducted with the U.S. dollar.

And it’s not just on a macro scale that American greenbacks remain relevant. Despite the promise of cryptocurrency, cash is still the most reliable and anonymous form of payment available, and multiple studies over the years have shown that humans have a deeper connection to hard money than their digital representations. This affects behavior as well, with some studies suggesting that we spend 12 to 18 percent more with credit cards than hard cash.

Of course, there are serious moves towards cashless payments becoming the norm around the world, including in Kenya, Sweden, and China, but thus far, this has not affected the U.S. dollar in the same way. Nicolas Christin, a researcher at Carnegie Mellon University, explained to the BBC in 2015 that this might because of the steadiness of the American currency over the years in comparison to others, which “might make Americans more attached and trustworthy of their bills than other people.”

Of course, that the U.S. dollar bill is going strong today does not mean that this will always be the case. Money is itself a technology, and technologies are always changing.