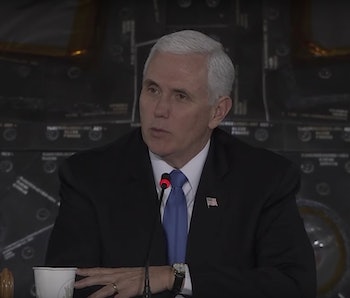 Vice President Mike Pence praised the successful launch of SpaceX’s Falcon Heavy rocket during the second meeting of the National Space Council Wednesday, all while knocking government organizations like NASA and the Federal Aviation Administration.

“While American industry and technology have leaped towards the future, our government agencies too often have remained stuck in the past,” said Pence, who is the head of the council.

Pence’s keynote at NASA’s Kennedy Space Center made it clear that under his leadership the council will prioritize setting up private aerospace industries to succeed, rather than bolstering agencies like NASA with funding.

On February 12, the Trump administration released its 2019 budget proposal, which broke down the money the White House is planning to give NASA. The space administration received a measly increase of 2.6 percent, a figure barely more than the 2017 inflation rate of 2.1 percent, according to the Bureau of Labor Statistics.

These marginal spending increases seemed counterintuitive, especially after President Donald Trump signed Space Policy Directive 1, which ordered NASA to help facilitate sending humans back to the Moon an on to Mars. Given the relative lack of investment in NASA itself, the Trump administration’s directive would appear to push the agency twoard strengthening its ties with the aerospace private sector, like SpaceX.

“It is here today, in the 21st Century, that the modern marvels that launched from these grounds prove that the public and private sectors are achieving far more together, than they ever have apart,” stated Pence.

It seems that NASA’s next great leap, if it ever does happen, will be hand-in-hand with the likes of SpaceX or Lockheed Martin.

More like this
Innovation
5.2.2022 8:30 PM
This radical architecture style could make future cities good for your health
By Claire Cameron
Science
5.12.2022 8:45 PM
China finds recent water flows on Mars, with big implications for alien life
By Charles Q. Choi
Science
5.2.2022 11:00 AM
Hot Jupiters: Why astronomers are obsessed with these “hellish” exoplanets
By Universe Today and Nancy Atkinson
Share: