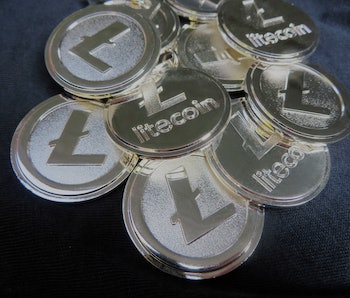 The dust has settled around Litecoin’s “hard fork,” Litecoin Cash. The brand new cryptocurrency has settled at a price of $6.44 as of 11 a.m. Eastern time Wednesday, down from its $9.56 high on Tuesday.

The fork has been a matter of contention. On one side, digital currency enthusiasts want to seize every new opportunity that is presented in the lucrative market. But more experienced investors are questioning how useful this new token actually is.

Kyle Forkey, a cryptocurrency startup advisor and founder of the blockchain consulting group Ethmint, tells Inverse that this latest move is not adding any value to the sector as a whole but is still making money because of the hype surrounding cryptocurrency investing presently.

“Forks are hot and people make killings on them,” said Forkey. “If Ethereum or Cardano or any other major crypto decides to have a fork, it will probably do well at the onset just because of all of the media attention it will attract. Thinking a little midterm here, the Litecoin fork isn’t really solving for any type of need.”

Bitcoin Cash — the 2017 hard fork of bitcoin — was meant to solve glaring issues with the world’s top cryptocurrency. At the time, bitcoin transactions were taking more than a full day, and transaction fees were as high as $20. The fork alleviated these problems and gave those interested another channel of investment.

Litecoin Cash also claims to be faster, but Litecoin isn’t experiencing anywhere near the issues bitcoin was when it forked. Indeed, part of the whole original point of Litecoin was to provide a faster alternative to bitcoin.

“Litecoin is pretty fast. If I sent you one you would receive it within a few seconds, if not almost instantaneously, and it’s pretty cheap to do so,” explained Forkey. “If Litecoin takes three seconds and Litecoin Cash claims to take two seconds, that’s not a real problem. Bitcoin Cash added value to the market. This is just people stirring the pot.”

While he believes comparing Bitcoin Cash to Litecoin Cash is not applicable, he acknowledges the new token has been fairly successful. On its third day more than $4 million worth of Litecoin Cash has been traded on the YoBit exchange.

But Forkey says that this has a lot to do with questionable investment practices that have come to be associated with cryptocurrency. He likens it to people throwing darts at a dartboard to see what sticks. And so far, there’s been very little downside to these forks for their creators and their investors.

“If I was in the business of making forks, I would go down the line of every top ten cryptocurrency and fork them all. It would make money,” said Forkey. “That has a lot to do with the investment immaturity. But in the next two or three years, once people actually start to lose money for making bad decisions, then I think we’re going to see a much more mature crypto space.”

Until then, we’ll see how Litecoin Cash fairs in the market, and if any other forks will piggyback off of its apparent success.