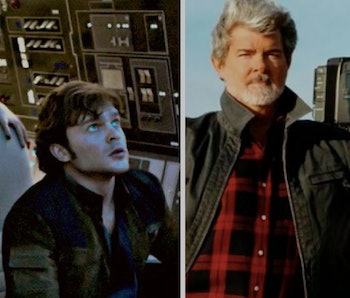 Like a Jedi ghost that isn’t ever really gone, George Lucas’s presence continues to be felt on the new Star Wars films, even if he’s not technically involved. And Lucas’s latest contribution to the new films is probably his most direct. When Lucas visited the set of Solo, he briefly collaborated with Ron Howard on a specific and funny idea for a scene.

On Friday, Entertainment Weekly continued its preview of Solo: A Star Wars Story and published a brief anecdote from Lucasfilm president Kathleen Kennedy about Lucas stopping by the set of Solo and making a small suggestion as to what should happen in the film.

“There’s a scene on the Millennium Falcon where George said, ‘Why doesn’t Han just do this.’” Kennedy said. “It actually is a funny little bit that will probably get a laugh.” Howard was naturally onboard with Lucas offering ideas and told the cast and crew “George wants us to do this.”

What “this” is, of course, remains to be seen.

In the same EW story, Howard mentions that he views Lucas as “big brother,” partly because Lucas trusted Howard with another Lucasfilm project, 1988’s fantasy film, Willow. Howard also stuck up for Lucas in 1999 when he defended the often derided, Star Wars Episode I: The Phantom Menace.

“I know he kind of fundamentally feels like, first and foremost, [these films are] sort of for 12-year-old boys,” Howard said. “And yet even he knows that it’s grown so far beyond that, and the fans have grown with the series in a great, important way.”

“I think George felt pretty great about that,” Kennedy said of the brief collaboration between Howard and Lucas. “He could revisit these characters, and I think he felt so comfortable, obviously with Ron being there, that it was just fun for him.” Though he sold Lucasfilm to Disney in 2012, it’s not unheard of for Lucas to suggest certain things to the directors of the new Star Wars films. In 2015, he visited the set of Rogue One and even asked director Gareth Edwards to include a specific helmet into the film.

But, contributing a joke is a little different than suggesting a helmet. Will George Lucas’s brief contribution to Solo fall into adolescent humor side of the Force, or will it be something slightly more sophisticated? With less than four months to go, we’re a just a few hyperspace jumps away from finding out.