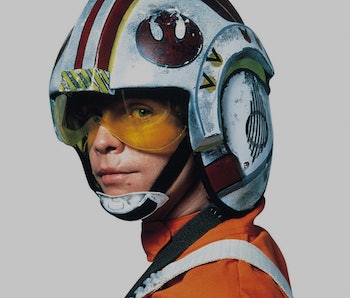 A mysterious helmet has been placed into Rogue One: A Star Wars Story by the maker of the entire galaxy himself: George Lucas. But, there are a lot of helmets in Star Wars, which one did Lucas ask for specifically?

According, to Gareth Edwards — the director Rogue One — Lucas asked for something specifically to be put in the new Star Wars-prequel: “A helmet we loved but didn’t know where to put it; there wasn’t really an opportunity to use it”. Speaking to Total Film, Edwards admitted this helmet wasn’t something he would have “picked” himself, but added “Whatever [Lucas] liked was pretty much guaranteed to be in the film.”

Presumably, this George Lucas-selected helmet is just going to be lying around somewhere in Rogue One, and not a pivotal plot point, but what specific helmet did Lucas want? According to the Games Radar Edwards snippet, the director didn’t give a “description” of the helmet.

So, what could it be? The good money is on some kind of helmet for a Rebel pilot or Imperial Trooper, as those two opposing factions dominate the story of Rogue One. But what if it’s something weirder: Luke’s X-wing pilot helmet? Some kind of proto-Boba Fett helmet could be in the mix here, too. Or maybe the helmet with the blast-shield from Luke’s training on the Falcon in A New Hope. Plus, there’s even this outlier: Rey’s X-wing helmet from The Force Awakens.

The fact is, nobody knows. But now, fans will be looking at every single helmet in Rogue One, wondering which one George Lucas selected.