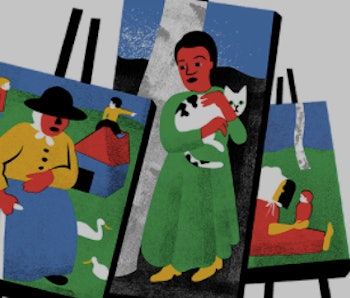 With a colorful homepage doodle on Thursday, Google paid tribute to the artistic career of the expressionist painter Paula Modersohn-Becker on her 142nd birthday. While she isn’t quite a household name, Modersohn-Becker is an extremely influential figure in art history. Like her contemporaries Pablo Picasso and Henri Matisse, Modersohn-Becker was a similarly innovative artist who helped build the foundations of the modernist movement.

Modersohn-Becker was born on February 8, 1876 in Dresden, Germany. She was formally trained in classical techniques like realism and naturalism, but abandoned the artistic conventions of her early education in her later paintings — the defining attribute of modernist painters.

Tragically, Modersohn-Becker only lived to the age of 31, when she died of a postpartum embolism in 1907. But she made up for the brevity of her career with a prolific hand; she [painted over 80 paintings]https://www.google.com/doodles/paula-modersohn-beckers-142nd-birthday) in 1906 alone.

In an interview with The New Yorker in 2013, Radycki outlined the stylistic elements that made Modersohn-Becker such a dynamic artist, crediting her with, “bold experiments in subject matter, color, modeling, and brushwork.” It was these kinds of techniques that formed the scaffolding upon which Modersohn-Becker, along with Picasso and Matisse helped to pioneer a new artistic genre.

As Radyicki notes, Modersohn-Becker’s work isn’t just notable for technical innovations. The content of her paintings also represented a radical departure from tradition. She was the first artist to paint a female nude self-portrait, and she focused on domestic subjects that were largely ignored by painters of her time: a woman breastfeeding, a non-sentimental look at a mother holding child. That’s not to say she only painted the female form. Modersohn-Becker displayed a wide range, painting everything from still-lifes and landscapes to portraits and floral pieces.

Modersohn-Becker was also a talented writer. Her letters and diaries, which were collected and posthumously published by Kurt Wolff (who also published Kafka), enjoyed more popularity in early 20th century Europe than her paintings. According to Radycki, that’s because they showcased a very different side of her personality, one that was energetic and mischievous. That disconnect caused people to ignore Modersohn-Becker’s paintings, and they continued to languish in relative obscurity for the next century. “[Readers] expected the paintings to be as sweet as the letters,” Radycki said. “But they found them to be edgier and didn’t exactly know what to do with that aspect of her. That’s where she always fell between the cracks.”

Perhaps with the Google seal of approval, Paula Modersohn-Becker gets closer her rightful place in the artistic canon.