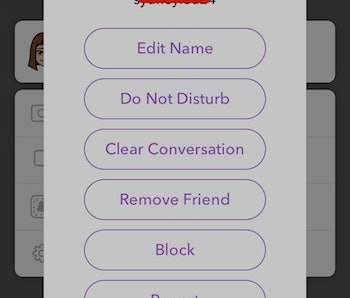 Snapchat’s latest update now offers a “do not disturb” feature to the app so you can turn off notifications from particularly persistent Snapchatters without making the entire app go quiet, or officially blocking anyone. The update is part of a growing effort among social media platforms to address the addictive and distracting nature of their apps, something a growing number of technology experts are calling for.

There’s a larger redesign coming, but it’s not available in the United States just yet. In the meantime, you can escape the oversaturated notification zone that is Snapchat by putting your more active friends on mute. Make sure you’ve downloaded the most recent update from the app store, and enjoy the sound of silence.

How To Turn On Do Not Disturb

Activating the Do Not Disturb feature will mute incoming notifications from any of your selected Snapchat friends or groups. To turn it on, simply press and hold someone’s name anywhere in the app; this will prompt an options menu to pop up. Select the “Settings” tab, and a second menu will appear.

From this menu, you can select Do Not Disturb. From then on, you won’t be bothered when that person sends you a chat, and that person won’t know that you’ve muted them.

Why Use Do Not Disturb?

One major advocate for Do Not Disturb and similar features is Tristan Harris, a former design ethicist at Google who recently launched the Center for Humane Technology. The Center is motivated by an alarming thesis: “Our society is being hijacked by technology.”

Their mission is to take society back. They’re promoting something called the “Time Well Spent” movement, and calling upon developers and consumers to curtail technology addiction through human-focused design.

The Do Not Disturb feature is one such design principle. By giving users the option to set their own notification boundaries, developers can foster enjoyable app use and better communication between people (the ostensible goal of apps like Snapchat) instead of just constant communication.

Snapchat is a little late to the game. Facebook Messenger has included a Do Not Disturb option for years, and Apple’s iOS includes integrated Do Not Disturb features for both phone calls and texting.

Snapchat finally buying in to anti-distraction features is a good omen for humane tech advocates. It signals that social media companies may finally be learning an important lesson: a good app doesn’t just hook people, it helps people.