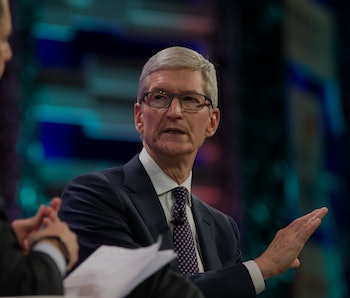 Tim Cook thinks technology could do with a little more humanity. In an interview on Wednesday, the Apple CEO explained how the automatic driving mode in iOS 11, the latest major software update for the iPhone that launched in September, is an example of the company’s approach to technology that involves thinking about its users first.

“It’s important that the creators put humanity at the center of their creations,” Cook said on stage in Guangzhou, China, during an interview with Fortune executive editor Adam Lashinsky.

Cook gave the example of the driving detection in the new version of iOS. Using your phone while driving is incredibly dangerous behaviour, and one that the iPhone encourages in its own way by lighting up and buzzing with notifications.

“This is an awful thing, no one should do that,” Cook said.

The phone uses a number of clues to check whether a user is driving. The accelerometer, GPS positioning, and the speed at which nearby Wi-fi networks appear and disappear are all used to judge whether a phone is moving at speed.

If activated, the feature will switch the phone into Do Not Disturb mode that stops it from lighting up in the first place. Under the “Settings” app in the “Do Not Disturb” section, users can block the mode from activating automatically.

“We try to put the user the center of everything we do, and so we’re trying to make the user experience great,” Cook said. “We think a lot about the consequences, what our products can be used for that are not good, and we try our best to come up with ways to diminish the things that aren’t good and amplify the things that are.”

Cook also noted that this philosophy has cropped up with the company’s approach to the App Store. Apple has received criticism for its heavy-handed approach to curation, only this month removing the “Nude” app only to place it back days later.

“For years, years, and we’ve been criticized for this…quite a bit in some cases…the App Store, we’ve always curated what was in the store,” Cook said, explaining how Apple blocks submissions that promote terrorism, pornography, hate speech, and other categories. “All these things you never want kids looking at.”

The full interview, where Cook also discusses the company’s approach to China and its thoughts about WeChat, can be viewed below:

More like this
Innovation
8.14.2022 10:00 PM
60 years ago, an iconoclast designer revealed a fix for our biggest tech problem
By Tim Gorichanaz and The Conversation
Innovation
18 hours ago
After quitting the ISS, Russia reveals its next-gen space station
By Darren Orf
Innovation
18 hours ago
Scientists finally found an efficient way to recycle plastic foam — it could make them rich
By Joanna Thompson
Related Tags
Share: