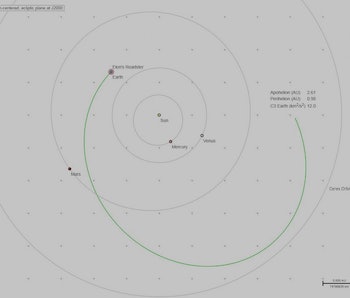 Tuesday’s test mission of the Falcon Heavy proved that the SpaceX rocket is in fact the world’s most powerful operational booster. But it might have even been a little too powerful for its precious payload.

The launch was supposed to send Elon Musk’s Tesla Roadster into orbit around the sun, where it would fly by Mars and Earth over and over again. But late on Tuesday night, Musk tweeted an image depicting the current trajectory of his vehicle, and it’s not going according to plan.

The Roadster came ever so close to the Red Planet, where it was supposed to hang a sharp corner to begin an extremely elliptical orbit around the sun in which the Earth is the nearest point and mars in the further point. But now the car is off towards the asteroid belt — a region between Mars and Jupiter where most of the asteroids in the solar system are found orbiting the sun.

At the time of this writing, SpaceX hasn’t released an official statement regarding the detour but it’s hard not to be afraid for “Starman” sitting inside Musk’s Roadster. The asteroid belt is home to millions of huge space rocks, which could obliterate the electric vehicle if they were to collide with it.

But “DON’T PANIC” just yet — astronomer Alan Fitzsimmons took it upon himself to simulate the Roadster’s new orbit over 10,000 years and he said it’s pretty much safe.

“Basically the Tesla Speedster is ok,” tweeted Fitzsimmons who is a professor at Queen’s University Belfast in the United Kingdom. “But the orbit slowly elongates by gravitational perturbations and stars getting kicked about by Jupiter.”

So as long as it avoids collision, the Roadster should be pretty fine for the next few thousand years. If it makes it that long it will supposedly begin to drift off deeper into space because of Jupiter’s massive gravitation force will begin messing with its orbit.

Safe travels Starman, try not to get too lost out there.