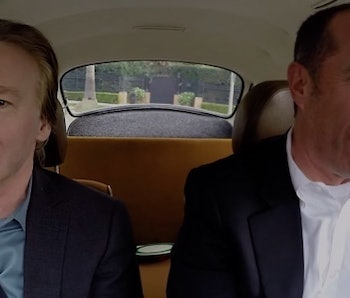 Bill Maher’s name often appears a few syllables after the word “polarizing,” an overused descriptor that is — in his particular case — apt. The only people who are indifferent to Bill Maher are people who are unaware of Bill Maher. He’s like an unscratch-able itch, mocking the political left for its self regard and heaping scorn on the right. Like everything else that Jerry Seinfeld wants to talk about, Maher is bothersome.

It should come as no surprise that the two men love each other.

Maher is the rare comic whose success (measured more in longevity than in dollars) rivals Seinfeld’s and the two men treat each other as absolute equals, providing unsolicited critiques at an extraordinary pace. One calls the other smug and the other calls the one arrogant. They are both correct and both willing to acknowledge same. Basically, they’re very comfortable with themselves — for better or for worse — and relish someone calling them on their shit.

The best moment in the episode, which somewhat lacked for tension because of minimal entanglements, is when the two men discuss the odd phenomenon of being asked if they’d like to cut bathroom lines. Maher, ever the populist, says no. Seinfeld, ever the Seinfeld, says sure, adding that not all people are created equal. Maher, who clearly believes this, but also believes that all people should act equal, laughs at his friend’s distance from the human experience.

But Maher is distant too — in his own way. His house seems like his house (not that there’s anything wrong with that). He struggles to understand how his solitary friend became a family man. Seinfeld doesn’t know, but he’s content with the situation. Maher wants a solution. And there’s the difference between the two sensibilities: Maher is ferociously digging for answers while Seinfeld shrugs and makes jokes. Only one of these guys is a pure comedian.

More like this
Gear
Jan. 20, 2023
This limited-edition e-bike from Juiced Bikes is its most powerful yet
By Jackson Chen
Gear
Feb. 2, 2023
Samsung’s Galaxy S23s Feel Comfortably Familiar
By Ian Carlos Campbell
Entertainment
20 hours ago
DC Is Finally Putting Robin in a Batman Movie. It's About Time.
By Eric Francisco
LEARN SOMETHING NEW EVERY DAY.
Share: