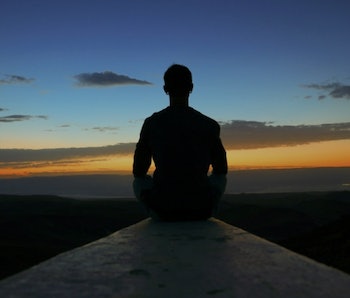 Meditation is a fixture of many religions and a practice that humans have exercised for thousands of years. In recent years, the central ideas in that rich and varied history have been repackaged into a secular tool that promises positive change: Now, smartphone apps and corporate training sessions are ready and available to teach how to meditate your way to a better self.

They’re not saying that there’s no way meditation can create these changes, though. Rather, their point is that the studies conducted on meditation so far have been lackluster.

“Despite the high hopes of practitioners and past studies, our research found that methodological shortcomings greatly influenced the results we found,” co-author and Coventry University psychologist Miguel Farias, Ph.D., explained in a statement released Monday.

“Most of the initial positive results disappeared when the meditation groups were compared to other groups that engaged in tasks unrelated to meditation.”

The team, consisting of scientists from Coventry, Massey, and Radbound Universities, set out to see what the science literature on mindfulness and meditation actually showed. Their first search turned up 4,517 studies from various journals, but after weeding out studies that didn’t have randomized controlled trials — crucial to producing sound data — they ended up with only 22 papers.

But 60 percent of those papers, published between 2004 and 2015, were still considered methodologically “weak” and were weeded out.

One big issue with studying the effect of meditation on well-being is controlling for “unintentional expectation bias,” which is the idea that, if a person goes in expecting to feel at peace, they’ll probably feel at peace. Only one of the studies factored in a way to control for this possibility in its methodology.

Another big problem is confirmation bias, which refers to a person’s tendency to fit new experiences into their existing worldview; in this case, this refers to participants who already believe meditation is beneficial and thus tend to think their meditation practice is extra helpful — maybe more than it actually is. Confirmation bias, the researchers write, “was particularly prevalent in the studies we reviewed in the form of an ‘over-reporting of ‘marginally significant’ results.”

Their initial analysis of these “marginally significant results” suggested that meditation could make people feel more compassionate or empathetic, at least compared to situations where they hadn’t tried any new emotionally engaging activity. However, a closer look revealed a critical caveat: Significant increases in compassion “only occurred if the intervention teacher was a co-author of the published study.” This connection, Farias believes, “reveals that the researchers might have unintentionally biased their results.”

None of the studies found that meditation played significant role in reducing aggression or prejudice, and none improved any person’s social connectedness.

An underlying flaw of all the studies, the researchers argue, is that they don’t attempt to identify the mechanisms by which meditation actually works on the body and mind, which “makes the literature more vulnerable to implicit magical beliefs about the power of Eastern contemplative techniques.” Buddhist meditation, the researchers note, is commonly misread as overwhelmingly positive: Meditation experiences are complicated, and while some practitioners report positive experiences like the feeling of peace, the experience can also cause emotions like sadness and fear.

“This literature [the studies reviewed] generally conveys the impression that Buddhism is particularly concerned with the promotion of prosociality and that meditation is the means to achieve it,” the researchers write. “This is a rather inaccurate understanding of a rich and plural religious tradition.”

Of course, this analysis doesn’t suggest that there are no positive results that come with meditation. What these researchers are saying is that the science demonstrating “yes or no” is systematically missing. Better, more rigorous research is needed so that you can make an educated decision about buying an app that says it can fix your brain and heal your soul.