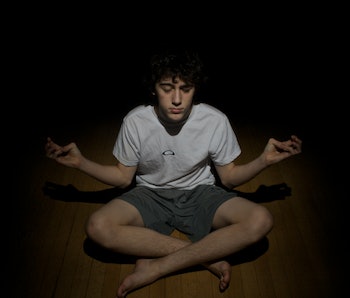 Mindfulness meditation makes you more likely to think you remember things that never happened, according to new research published in Psychological Science.

Researchers conducted a series of experiments on undergraduate students where the students were asked to either focus on their breath or let their minds wander for 15 minutes. Afterwards, they were given different memory recall exercises. The ones who meditated on their breath were significantly more likely to remember things that never happened.

In one experiment, the students were given a list of 15 words related to “trash,” but not the word “trash” itself (i.e. garbage, waste, can, refuse, and sewage). Afterwards, they were asked to recall as many of the words as possible. Two out of five of those who meditated falsely believed that “trash” was on the list, compared with just one in five of those who let their minds wander. (This was one of several examples so don’t be too quick to dismiss it.)

The related content appears to be crucial. In a separate experiment, subjects were shown a series of words and asked to try to remember them. They were then given another set, and had to determine if they had seen each of them before in the first set. Those who meditated were good at picking out new words that were completely unrelated to those they had seen before, but if they saw a related word (for example, “shoe” when they had seen “foot”) they were more likely to say they had seen it. It would seem that they had sort of mulled over and triangulated the word subconsciously.

Mindfulness mediation is big business these days. Proponents will swear that it holds the keys to riches, weight loss, and even world peace. Celebrities like Oprah and Arianna Huffington extoll its supposedly limitless value. David Lynch has trademarked his own version of Transcendental Meditation, which he peddles to over-worked Silicon Valley types as an easy way to relieve stress, get healthy, and achieve business success.

Authors of the recent study do note that some of the alleged benefits of meditation are held up by the research. They point to scientific articles that linked mindfulness practice with lower levels of pain, anxiety, stress, and depression, and higher levels of psychological wellbeing. But the unintended consequence of this might be that people who meditate lose just a little bit of their grip on reality.

More like this
Science
1 hour ago
The Weirdest Sci-Fi Apocalypse on Netflix Reveals a Controversial Field of Medicine
By Tara Yarlagadda
Science
Feb. 3, 2023
Snow Moon 2023: You Need to See February's Bright Full Moon This Weekend
By Jeff Nagle
Science
Feb. 3, 2023
Look: Astronomers Find a Potentially Habitable Exoplanet With a Violent Past
By Kiona Smith
LEARN SOMETHING NEW EVERY DAY.
Share: