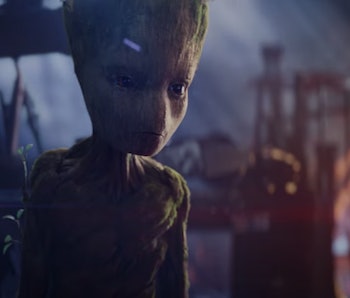 When I was a teenager, I daydreamed of cutting class to go out into space with the Marvel superheroes. Groot, meanwhile, gets to live that dream in Avengers: Infinity War, and the walking adolescent sequoia is bored out of his mind. That ungrateful little…

On Sunday during the Super Bowl, one of the most hyped trailers of the evening delivered in the TV spot for Marvel’s Avengers: Infinity War. Poised to be one of the biggest Marvel movies of all time — until 2019, when Avengers 4 hits theaters — Infinity War will unite all of the big-screen Marvel heroes. In one shot of the TV spot, Thor (Chris Hemsworth) rides shotgun with the Guardians of the Galaxy, including Rocket and a teen Groot, who is fiddling with his phone as if he’s texting “bored lol, u?” to someone from AP chem.

In case the timeline of the Marvel Cinematic Universe has gotten a little confusing, Groot (voiced by Vin Diesel, which is still inspired casting) sacrificed himself at the end of 2014’s Guardians of the Galaxy in the film’s most touching moment (“We are Groot”). Thankfully, Groot survived, being reborn from a twig in Rocket’s little pot.

Only a few months pass before 2017’s Guardians of the Galaxy Vol. 2, in which the hulking, giant tree has becom an itty bitty Baby Groot, whom the Guardians have to watch over while they’re bounty hunting for dough across the cosmos. Now, in Avengers: Infinity War, Groot has grown into the equivalent of a teenager, which means now he’s texting and talking back to dad (Star-Lord). You know, like all teenagers do.

Groot’s age is just one of the many new developments of the MCU in Infinity War. Thor still has a missing eye, an injury sustained in 2017’s Thor: Ragnarok, and Captain America (Chris Evans) still isn’t “Captain America” — he’s now a bearded vigilante whose character is akin to Nomad, the country-less superhero Steve Rogers adopted after the Watergate scandal. Also, Vision (Paul Bettany) has found a way to look more human, to the amazement of Wanda (Elizabeth Olson). Needless to say, things won’t be the same after Infinity War.

Marvel’s Avengers: Infinity War will be released in theaters on May 4.