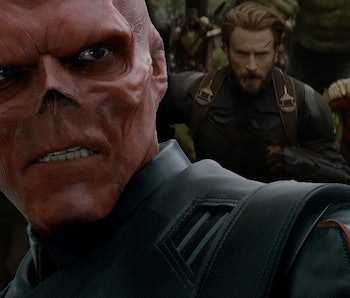 Steve Rogers is a man with no country in Avengers: Infinity War. Disillusioned by the events of Captain America: The Winter Soldier and Captain America: Civil War, the 90-year-old superhero has ditched his stars and stripes like how his comic book version did in the 1970s, when Cap became “Nomad” a few years after Watergate.

But eagle-eyed Marvel fans have realized that Cap’s arch-nemesis, Red Skull (played by Hugo Weaving) may have foreshadowed his metamorphosis into Nomad way back in his first movie, Captain America: The First Avenger (2011).

On Tuesday, a Marvel fan on Reddit shared a meme that paired a quote of Weaving’s Red Skull with Evans’s Nomad-esque outfit in Infinity War. The quote comes from the climactic fight in The First Avenger, where Red Skull taunts Captain America:

“You could have the power of the gods! Yet you wear a flag on your chest and think you fight a battle of nations. I have seen the future, Captain! There are no flags!”

Back in 2011, it was easy to dismiss Red Skull’s words and his cinematic bad guy bravado. But now in 2018, the Nazi general’s words carry ominous weight, and though it could be a coincidence, one can’t help but think how it’s the little things that reverberate and amplify through the Marvel Cinematic Universe.

The Nomad connection is only stronger now after Infinity War co-director Joe Russo appeared on the pop culture podcast Happy Sad Confused this past Monday, where he pretty much confirmed Captain America will be Nomad in Infinity War. He just won’t use the name.

“I think you see it in the trailer is that he is embracing the spirit of Nomad,” Russo said. “It was always our intent from the moment we got involved with that character to deconstruct him. That’s what we like, that’s what we find interesting.”

The director added: “With a character called Captain America, you have to address the concept of who he is because his identity is tied to his country. So we thought it would be a really compelling narrative if he got into conflict with his identity, with the country, so the notion, the path that he’s following is the same path that we left him in at the end of Civil War, which is he’s a character without a country.”

Avengers: Infinity War will hit theaters on May 4.