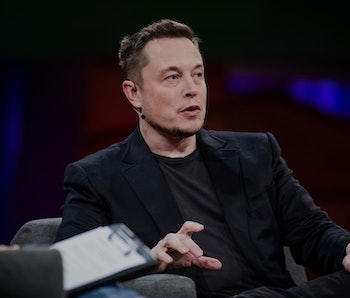 Elon Musk can’t wait for the travel agency of the future. The SpaceX CEO shared two stunning posters on Monday depicting a future commercial spaceflight service, with the ideal coming ever closer to reality through his company’s work.

It’s an exciting time for Musk’s space-bound ambitions, as the company plans to launch its Falcon Heavy rocket on Tuesday from launchpad 39A at Kennedy Space Center in Cape Canaveral, Florida. The 229-foot behemoth will use three Falcon 9 engine cores and 27 Merlin engines to earn it the accolade of “most powerful rocket in the world.” It’s not just for show, though. The Falcon Heavy is a key step toward the BFR that will transport humans to Mars by 2024.

The pressure is on to get Tuesday’s launch right, but Musk couldn’t help taking a moment to appreciate the wonder of the task ahead. If the Falcon Heavy succeeds in its inaugural flight, it will send a Tesla Roadster playing David Bowie’s “Space Oddity” on repeat orbiting Mars. It’s hard to think of a cooler way to set the stage for spaceflight’s next frontier.

View the posters below:

Musk didn’t create the posters himself. The first one is by a designer called “TropicalToad,” who sells prints of their design through their own Zazzle store. The creator gave this description below:

This retro space travel illustration, in the style of a vintage travel poster, depicts a futuristic space port on the surface of the planet Mars. Four giant domes sit in the center of Hellas Planitia, a vast plain inside the Hellas impact crater on the southern hemisphere of Mars, while three rocket ships are readied for lift off by a ground crew of astronauts. In the sky above, another rocket blasts off into space, carrying passengers to a distant world.

Such an image may still be in the realms of science fiction for now, but perhaps in the not too distant future, humans will routinely shuttle back and forth between the planets of our solar system in scenes not unlike this one.

It’s not just Mars that has captured Musk’s imagination, though.

The second poster is designed by Steve Thomas, a Minnesota-based artist who has created licensed work for the likes of Star Wars, Star Trek, and Marvel, as well as works for Pearl Jam and Blink-182. Although ex-frontman Tom DeLonge has made a name for himself as an alien life researcher, Thomas’s commissions focused on limited edition concert posters.