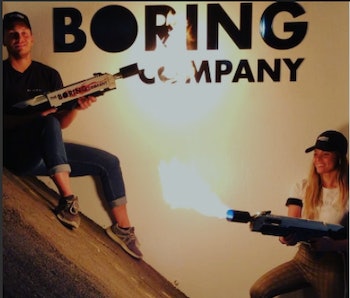 Since Elon Musk first announced that his tunnel digging venture, The Boring Company, would be selling flamethrowers in late January, the 20,000 $500 weapons, nut roasters, and ultimate party favors (depending on how you look at it), have been quickly paid.

But he’s hit a small snafu in the next step of bringing his fiery product to market: delivering the to purchasers. And who is to blame but government bureaucracies? As he tweeted out on Friday, certain pesky customs agencies apparently regulate the shipment of flamethrowers. What party-poopers — as usual.

So, to get around this inconvenience, the billionaire has come up with a genius solution: simply renaming his flame-throwing product, “Not a Flamethrower.”

He even tweeted out an image of his updated website with this new marketing copy:

Who knows whether Musk is actually serious about this, as he is known for tweeting out weird things that keep his Twitter followers guessing.

Such was the case with the initial announcement about flamethrower sales. After selling out $20 hats with The Boring Company’s logo as the company’s first major fundraising effort, Musk began making references to Spaceballs, the 1987 Mel Brooks comedy that spoofed the Star Wars merchandising empire, for his second fundraising effort. “Spaceballs: The Flamethrower!” Brooks yells in the film as Yogurt, the film’s satirical take on Yoda. “The kids love this stuff.”

Whether or not these flamethrowers ship in April, as planned,, or how they make it to end users at all, Musk has already made $10 million from flamethrower sales. And there is also, apparently, a secondary market for the as-yet-unshipped flamethrowers on Ebay, as The Daily Mail reports. As of Friday, there were 27 listings online, ranging in price from $1000 to $20,000.