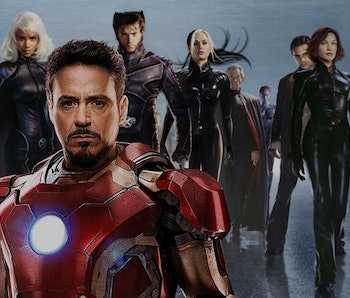 Disney’s purchase of 21st Century Fox opened up a whole new world of possibilities for the Marvel Cinematic Universe. Characters like Wolverine, the Fantastic Four and Deadpool could finally show up and fight crime alongside the MCU’s current heroes, such as Iron Man and Captain America. Excited fans naturally started talking, tweeting, and writing about the possibilities, but it seems everyone is getting ahead of themselves.

Marvel Studios president Kevin Feige told Vulture that he just isn’t sure what the merger means for the MCU just yet. “The truth of the matter as I understand it is the deal has to be figured out,” he said. “There’s been no communication. We’re not thinking about it. We’re focusing on everything we’ve already announced. If and when the deal actually happens, we’ll start to think more about it. Until then, we have a lot to do.”

In fact, Feige read about the deal in the press like most superhero fans. “These are big deals and certainly above my pay grade,” he said.

The reality is any changes to the MCU would probably take a lot more time and planning. With the incredible number of moving parts, the many characters and preciously announced films, including a whole new batch of characters could derail what has already been planned for the film franchise.

Taking into account the huge cast of Avengers: Infinity War alone makes taking a beat before planning any integration a smart move. Marvel has several films in various states of production set to premiere between February’s Black Panther and 2019.

But the appearance of Spider-Man in the Marvel Cinematic Universe, even when Sony had the rights, is evidence that Marvel isn’t opposed to bringing in the characters they need. So, with a new slew of available characters, odds are some new faces as a result of the merger. Just not in the near future.