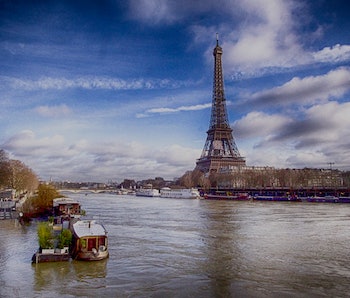 Paris’s scenic Seine River has long been a tourist draw, but this week, it’s coming a little closer than visitors — and residents — bargained for.

After a month of heavy rains, the City of Lights has been on the maximum-level orange flooding alert since last Tuesday. The river, which normally sits at around 2 meters, or 6.5 feet, according to the Washington Post, is expected to reach its maximum height — just under twenty feet — between Sunday evening and Monday morning. The river has already overrun its banks.

The flooding has shut down several subway stops, a main road next to the river, parts of the Louvre Museum, the Eiffel Tower, and stopped all river traffic — including the Seine’s famed tourist boats. Additionally, by Sunday, nearly 1500 residents had been evacuated from their homes.

This week’s flooding comes just a year and a half after 2016 floods that reached 6.10-m. Parisians have been on the lookout for a 100-year flood ever since the waters of the Seine rose 8.62-m (about 28 feet) on January 28, 1910, turning the city into a French Venice for two months, and for a while, there were fears that this year’s flooding would reach that level. The December-January period is now the country’s third wettest on record, according to France’s meteorological agency, since they began collecting data.

Luckily, this year’s flood isn’t reaching 1910 levels, though the fact that two floods of such size have occurred within less than two years of each other is unprecedented — and more than a little worrying.