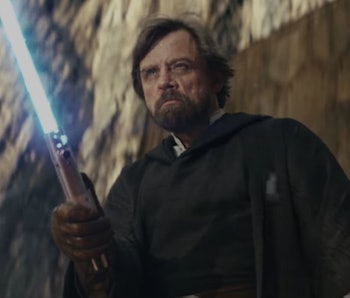 Much has been made of the climactic lightsaber “battle” in Rian Johnson’s divisive Star Wars: The Last Jedi. Even in a film that divided opinion on its treatment of long-held Star Wars traditions — wearing scary masks and keeping the bad guy alive until the final movie in the trilogy — the battle between Yrlo Ren and Luke Skywalker on the salt planet of Crait was perhaps the most-discussed.

The crux of the Skywalker-Ren showdown is one of confusion. What the hell? Jedi can just appear wherever they want like holograms? Some thought it a cool way to underline the impact of Luke’s legacy, some thought it a weird plot hole (spoiler: it was the first one).

Whatever you think, there was certainly little within the established Star Wars canon that suggested what Luke did — even as the most powerful Jedi of all-time — should even be possible. That is, until director Rian Johnson shared a series of tweets that, once and for all, refuted the notion, pointing to a Lucasfilm-approved book called The Jedi Path, published in 2010. The book set a precedent for something called the “doppelgänger” under “Advanced Force Techniques.”

Anyway, don’t take my (or Rian Johnson’s) word for it: you can own The Jedi Path right now. It’s available on Amazon Prime, along with another book, Book of Sith.

It’s a small price to pay to get a head-start on all the crazy new Jedi powers that debut in J.J. Abrams’s Episode IX, due out in December 2019.