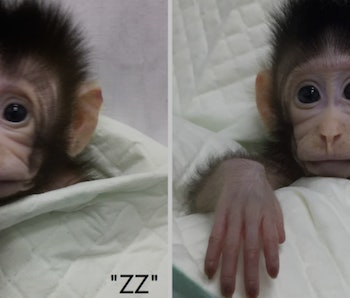 Almost 22 years ago, Dolly the sheep was born. A ewe created using a technique called somatic cell nuclear transfer (SCNT), she was the first mammal to be successfully cloned from an adult cell. Since then, SCNT has successfully been used to produce other mammals, including dogs, cats, and horses, but efforts to use this technique to create clones of non-human primates have failed.

That has all changed with the announcement of the successful birth of two healthy cynomolgus monkeys, more commonly known as long-tailed macaques. Researchers from the Chinese Academy of Sciences Institute of Neuroscience announced Wednesday that the monkeys, named Zhong Zhong and Hua Hua, were born eight and six weeks ago.

While they are not the first primate clones — a rhesus monkey was born in 1999 through a different cloning method called embryo splitting — the fact that the SCNT was used bodes well for scientists who want to create what the researchers behind this study describe as “customizable populations of genetically uniform monkeys.”

The announcement of the monkeys’ birth and the methods used to create them was published Wednesday in the journal Cell. In SCNT, a nucleus is removed from a healthy egg, and this egg becomes the host for a nucleus from another cell. When SCNT is used for reproductive cloning rather than therapeutic cloning, the resulting embryo is then implanted into a surrogate mother, where it grows like a regular embryo. If all goes to plan, will birth the clone.

But monkey cell nuclei has proven to be very resistant to SCNT, and the researchers say that before Zhong Zhong and Hua Hua, they unsuccessfully attempted several variations of SCNT. It eventually worked when, after the nuclear transfer, they introduced epigenetic modulators that reactivated the suppressed genes in the differentiated nucleus. They also chose to transfer nuclei taken from fibroblasts, the common cells found in the connective tissues of animals, instead of adult donor cells, which resulted in much higher rates of embryo development and pregnancy.

The big picture behind the existence of these newborns is to eventually create a generation of genetically uniform non-human primates that can be used as animal models for primate biology and biomedical research. While the ethics of animal testing are still debated, many scientists believe that in experiments where there are no other suitable, alternative methods for testing, it is more ethical to experiment on animals bred in captivity rather than caught in the wild. To date, more than 100,000 monkeys and apes are used for biomedical research around their world because of their genetic similarities to humans.

And if animals are genetically uniform, like cloned macaques, then they are seen as an “ideal animal models.”

“There are a lot of questions about primate biology that can be studied by having this additional model,” senior author Qiang Sun, Ph.D., said in a statement released Wednesday. “You can produce cloned monkeys with the same genetic background except the gene you manipulated. This will generate real models not just for genetically based brain diseases, but also cancer, immune, or metabolic disorders and allow us to test the efficacy of the drugs for these conditions before clinical use.”

Sun and his colleagues encourage the scientific community to continue the debate on the best and most acceptable practices surrounding cloning non-human primates in order to establish ethical standards. For their part, Zhong Zhong and Hua Hua are said to be developing normally and are likely to be joined by more newborn clones within the coming months.