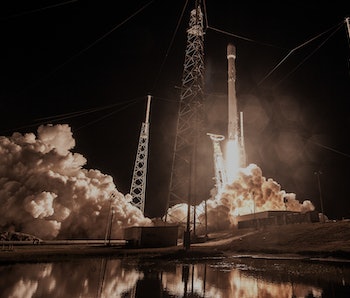 Amid day three of the latest government shutdown, NASA and other agencies are still hanging in suspension, with thousands of employees furloughed.

A SpaceX spokesperson told Inverse Monday that the aerospace company was also hurt by the political stalemate, as it could not carry out a test fire for its long-awaited Falcon Heavy system that was scheduled.

On Monday, Senate Democrats announced they’d reached a deal to end the shutdown, by extending the deadline to February 8. At this point, though, it’s still unclear when the impasse will actually end for good.

“We remain hopeful that the Congress will quickly resolve their differences and put our partners in the Air Force and NASA back to doing their important work as soon as possible,” SpaceX Communications Director John Taylor tells Inverse. “This shutdown impacts SpaceX’s Falcon Heavy demonstration, which is critical for future [National Security Strategy-backed] missions. It also impacts critical missions for our customers, including important international allies scheduled to launch shortly from Cape Canaveral and Vandenberg Air Force Base, as well as upcoming missions this spring to resupply the International Space Station.”

Although SpaceX is a private company, it partners with NASA to facilitate launches, including this one for the Falcon Heavy. But since employees at NASA’s Kennedy Space Center and the U.S. Air Force’s 45th Space Wing are furloughed, this halts SpaceX’s plans for the launch they’ve been planning since at least 2011.

Neither Musk nor SpaceX have publicly commented on the shutdown on Twitter, though some of the site’s users have expressed frustrations of their own — and understandably so.

While SpaceX Twitter is pretty depressing right now, NASA’s social media accounts might take top spot for Saddest Place On The Internet Right Now. All official NASA Twitter accounts have tweeted the same sad message in light of the shutdown:

What we do know for sure is that space scientists and engineers will struggle to do their jobs until the government can do its.

More like this
Science
Dec. 3, 2022
Opinion: Artemis should be the last NASA mission to send astronauts to the Moon
By The Conversation and Martin Rees
Science
6 hours ago
7 stunning images from Artemis I's final trip around the Moon
By Jennifer Walter
Science
Dec. 5, 2022
Artemis I is on its way home from the Moon — after flying just 80 miles over the lunar surface
By Doris Elín Urrutia
Related Tags
Share: