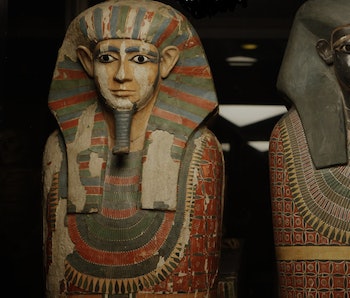 A long-standing, 3,800 thousand year family drama is finally resolved, no thanks to Maury. In 1907, Egyptologists excavated the tomb of Nakht-Ankh and Khnum-Nakht, two men thought to have lived during the 12th Dynasty in the Middle Kingdom of Egypt. The elite location of their burial, 250 miles south of Cairo, suggested that these men were nobility, and inscriptions on the coffins indicated their father was an unnamed governor and their mother was a woman named Khnum-Aa. That earned them the unoriginal nickname of the Two Brothers, and they were shipped off to Manchester, England to rest in infamy.

However, when they were unwrapped in 1908 by Egyptologist Dr. Margaret Murray, she thought that their bodies looked so different that they couldn’t be direct siblings. This familial connection was debated for another hundred years until now: In a new study published in the February edition of the Journal of Archeological Science, researchers from the University of Manchester used DNA analysis to determine the mummies are actually half-brothers. It might be a less catchy nickname, but it’s the truth nonetheless.

“It was a long and exhausting journey to the results but we are finally here,” co-author Konstantina Drosou, Ph.D., announced in a statement released Wednesday. “I am very grateful we were able to add a small but very important piece to the big history puzzle and I am sure the brothers would be very proud of us. These moments are what makes us believe in ancient DNA.”

The quest to solve this mystery through DNA analysis began in 2015, when the researchers extracted DNA from the teeth of the mummified men. The team localized the mitochondrial and Y chromosomes of both specimens, and sequenced the DNA to and discover that both the men belonged to the mitochondrial haplotype M1a1.

That finding suggests that the Two Brothers did share the same mother, described on their coffins as the “lady of the house.” But their Y chromosome sequences, despite still being incomplete, did show variations, indicating to the researchers that they had different fathers. This makes sense in the context of their actual lives: Nakht-Ankh was older than Khnum-Nakht by 20 years, and it appears that Khnum-Nakht died unexpectedly early.

The new study is another prime example of how scientists are turning to modern day DNA analysis to solve even very ancient investigations. Recently, teams have used such techniques to trace migratory routes for early civilizations, better characterize the genetic composition of modern Homo sapien, and even uncover who killed off the Aztecs. Moving forward, ancient civilization research will become more inextricably tied to the advancement of genomics and bioinformatics.