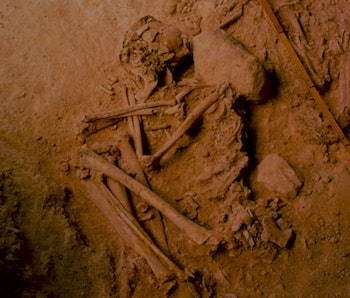 Back in the Neolithic age, a group of humans we now call the Proto-Indo-Europeans lived to the north of the Black Sea, where they prepared to take over the world. This culture spread over Europe and Asia with enormous speed and influence, taking their language and their genes with them. Today, nearly half of humans on Earth have a language in the Indo-European family as their first language.

But the Indo-European wave had its limits, and thanks to new analysis of ancient DNA, scientists are starting to work out the details. New research published Thursday in PLOS Genetics found limited genetic mixing of Indo-Europeans on the Iberian Peninsula, in what is now Portugal, through the Bronze Age.

“Given their very large contribution to most ancient Europeans at the time, it is surprising that we did not find such a massive migration to Iberia also, given they even reached Britain and Ireland!” lead author Rui Martiniano at Trinity College Dublin tells Inverse by email.

“On the other hand, some Portuguese archaeologists are of the opinion that despite the observed cultural transition in Iberia with the onset of Bronze, this was much less pronounced in comparison to the rest of Europe. So what we found fits well with this observation.”

Perhaps it was the natural barrier of the Pyrenees Mountains, or a particularly feisty and insular group of locals. Whatever the reason, the invasions — for the most part — stopped there. The researchers found only minimal genetic shifts in DNA extracted from bones at eight archaeological sites in what is now Portugal.

More surprising, though, were the small changes that were predominantly on the Y chromosome — meaning that the few Indo-Europeans that got that far were nearly all men. “Historically (and prehistorically) mostly men rather than women went into battle,” says Martiniano. “When looking at burial sites near or within prehistoric battle fields the majority of skeletons tend to be male. Even today, the majority of soldiers in most countries are men. We see a very abrupt turnover at the level of the Y chromosome, but we should really increase our sample size to be sure this is a global Iberian pattern rather than a local one.”

Still, the finding tracks with separate research that found that the wave of migrations out of the Pontic steppe and into Europe beginning about 5,000 years ago was largely a male phenomenon. While an earlier migration saw families moving together and bringing agricultural techniques with them, this Early Bronze Age wave appears to have been more about making war than settling down.

The fact that Indo-Europeans had limited influence within the Iberian Peninsula by the Bronze Age echoes to this day. People in the modern-day Basque region straddling the border between France and Spain speak a distinct language called Euskara. It is not part of the Indo-European family of languages, and in fact is considered a language isolate — related to none others spoken today. That’s some pretty serious staying power against the forces of cultural colonization.

But the influence of the steppe people eventually reached Iberia, although questions remain about how and when. “The big question is whether it happened in the late Bronze Age or at the onset of Iron Age,” says Martiniano. “It is also possible that there were also several later migrations that added to this steppe related admixture we see today, so it will be interesting to dissect how much of it entered throughout history.”

What this research shows, too, is the extraordinary potential of ancient DNA to paint a vivid and complex picture of human history. We to imagine the past in broad strokes, but new evidence has a way of throwing our easy theories off kilter and making room for a more dynamic story.

And we’ve got usable human DNA going back nearly half a million years.