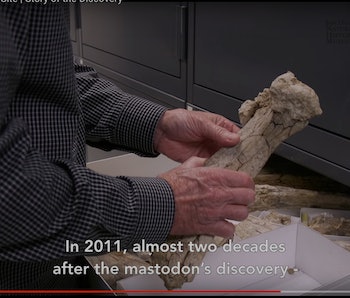 Scientists say they have found evidence that humans butchered a mastodon in California more than 100,000 years before the first humans were believed to have stepped foot on North America.

If that sounds unbelievable, you’re in good company. “My first reaction on reading the paper was, ‘No, this is wrong. Something’s wrong,’” says John McNabb, an archeologist with the University of Southampton who was not involved with the research, in a video produced by Nature.

The mastodon fossil was discovered in 1992 on a construction site in San Diego, but it’s taken a quarter century of research for research to build the case to say that yes, this is a site of human activity, and yes, it is indeed much older than anyone previously believed possible. New radiometric analysis, published Wednesday in Nature, dates the mastodon bones to 130,000 years ago.

No human fossils of that age have been found on the American continent, yet. But you can bet after this a lot of people are about to start looking for them. “If it does turn out to be true, it changes absolutely everything,” McNabb says.

The researchers involved with the find say they have multiple lines of evidence to support the assertion that the mastodon was slaughtered by humans using stone tools shortly after its death. Distinct breakage patterns, as well as scrapes and other markings on the bones, are consistent with other sites where humans have broken apart bones with rock hammers and anvils to harvest the marrow or fragments of bone. The researchers also conducted their own experiments smashing elephant bones and saw similar patterns. Other possible way the bones could have been shattered and scattered produce patterns inconsistent with what was found at this site, they argue.

Also, the fragments of bone were found near large stone rocks, and the scientists could not find an explanation for how they got there besides human transport. The stones were found in a layer of deposited silt, where you would not naturally find large rocks.

It’s going to take more evidence at more sites before the archeological community buys in completely to this new story, but if that happens, the story of the first North Americans will look very different.

If you slept through high school history, here’s your refresher. The dominant theory for decades was that the first people came to North America over the Bering Land Bridge between Russia and Alaska when water levels were much lower during the Ice Age, about 13,000 years ago.

It was a tidy theory, but one that’s currently in upheaval as more and more evidence has surfaced that humans must have come sooner, and over water. For example, last year a mastodon kill site in Florida was dated to 14,500 years, long before folks traveling over the Bering Land Bridge could have gotten there. Rare archaeological sites in North and South America have been dated to possibly as old as 30,000 years — but 130,000 years is something altogether different.

If verified, it would mean that humans figured out how to get to North America long before anyone expected. It would open endless new questions about who these people were, how they got to California, and if they died out or quietly persisted through the millennia.

The scientific process is constantly accepting new data and revising the story based on the available evidence. Normally, we expect new discoveries to fit within the framework of what was previously known. This is not that. “It’s less than a filling in of a gap than an opening of a whole new chapter,” says McNabb.