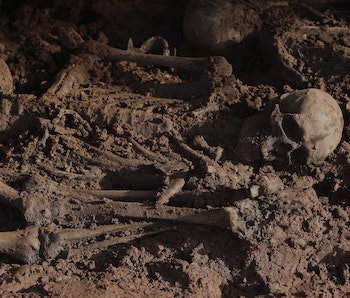 It’s a little morbid, for those curious about humanity’s past. Here are five ancient humans given a second life through scientific exploration in 2016 so far.

A great cargo ship sunk off the coast of the Greek island Antikythera 2,000 years ago. First discovered in 1900, divers have brought up an enormous wealth of ancient goods: Among the wreckage was the famous Antikythera mechanism, believed to be the oldest known analog computer.

This year, a new excavation effort found treasure of a different sort: human remains — the first exhumed since the advent of DNA sequencing technology. With permission from the Greek government, scientists hope to mine the old bones for traces of the victim’s former life. We may one day know who his ancestors were, and what his face may even have looked like.

Earlier this year Greek archaeologists dug up the remains of a teenager among animal bones on Mount Lykaion, a known sacrificial altar to Zeus. The remains — believed to be 3,000 years old — may help confirm ancient texts from Plato and others that humans were offered to the god of the sky on that spot. Previous digs had only uncovered animal parts.

According to a particularly gruesome version of the legend, human and animal meat were cooked together and eaten; the person who ate the human flesh would turn into a wolf for nine years, the AP reports.

Italy’s frozen mummy is the archaeological gift that keeps on giving. Discovered 25 years ago, scientists continue to use new techniques to uncover the secrets of the man murdered in a cold land at his campsite.

Fortunately for us, his attackers weren’t after his stuff or didn’t have time to collect it, and his tools and accoutrements offer an unprecedented glimpse into European life 5,300 years ago. Recently, scientists used 3D printing to build replicas of the famous mummy, so that more scientists and curious members of the public might have access to his mysteries.

The Mongolian Mummy and Her Pumped up Kicks

A 1,500-year-old grave site in Mongolia captured the world’s attention earlier this year thanks to the footwear worn by the female mummy who lay inside. She wore leather shoes with a distinct striping pattern, reminiscent of the much more modern Adidas brand.

While weirder corners of the internet immediately suspect conspiracy and time travel, scientists marveled at the completeness of the site. The woman belonged to the Turkic people and was buried alongside equestrian and household implements, as well as a horse sacrificed to her honor. Local archaeologists hope to glean more information about the rituals, customs, and lifestyle of her people from the find.

In October, archaeologists reported the discovery of a 2,500-year-old corpse in China, buried under a shroud of cannabis plants. It’s the only known grave where this has been done, and so it’s hard to extrapolate what the marijuana plant might have meant to the man, or the people who laid him in the ground.

However, since the plants were whole and flowering, it’s the first indication that cannabis was actively being cultivated in China at the time. Since there’s no evidence that hemp was being used as fiber for clothing or other uses, it’s suspected that weed was used symbolically or medicinally.

More like this
Science
6.14.2022 11:00 AM
200,000 years ago, ancient humans developed language — what did they say?
By Mark Pagel and The Conversation
Science
6.21.2022 10:45 AM
Ancient stalagmites point to a massive drought that upturned 6th century Arabia
By Allison Parshall
Science
6.25.2022 4:00 PM
Voyager: 12 spectacular images from NASA's longest-lasting mission
By Jennifer Walter
Related Tags
Share: