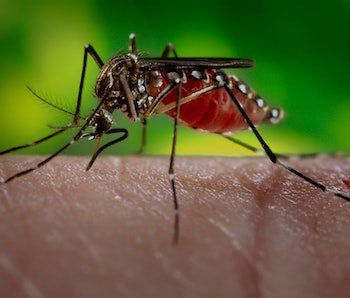 Malaria continues to be a devastating pathological monster for human beings. In most African countries, 75 percent of malaria cases stem from Plasmodium falciparum, a single-celled, microscopic parasite that confers one of deadliest forms of this infection to victims who fall ill, in part because it is turning out be resistant to most anti-malarial drugs we prescribe to fight infection. Characterizing why exactly this parasite is so impervious to modern medicine would go a long way to helping public health officials save the thousands who die from malaria every year.

In a new study published Friday in Science and funded in part by the Bill and Melinda Gates Foundation, scientists identify numerous mutations that allow P. falciparum to become resistant to treatment, which could be a boon to pharmaceutical researchers developing new biological targets against malaria

“This paper is really about how can we use genetics to design better drugs,” study co-author Elizabeth Winzeler, Ph.D., a professor at the University of California, San Diego and director of translational research at the UC Health Sciences Center for Immunology, Infection, and Inflammation, tells Inverse. “We would really love to have better drugs to treat malaria because the current ones we have are just not so hot. Resistance is a problem, and the current drugs were never designed rationally to do what we want them to do.”

Malaria is spread through biting mosquitos that give the parasite a vector for finding new hosts, where they multiply rapidly in the liver and blood cells of the person until they show symptoms like vomiting, chills, and a fever.

Winzeler and her team are seeking new treatments to prevent people from contracting and spreading malaria, which could ideally eliminate the threat of infection all together. The solution would be long-lasting, like a run you might give a pet to keep fleas away. She says it’s doable, but in order to get there new drugs that work against everything have to be designed.

That’s where this new study comes in. In their new paper, Winzeler and her team explain that to understand how existing therapeutics lose their efficacy they need to know what genes have become mutated and resistant to drugs. To do that, they cloned P. faciparum parasites to get a group of 262, and grew them in the presence of the compounds of anti-malarial drugs until they became somewhat resistant. After that, they sequenced the genome of the parasites and determined what genetic changes happened when resistance began. They identified 83 key genes associated with drug resistance and several new, chemically validated targets that new drugs could focus on to attack the malaria parasite.

The second finding is key. Knowing where to target the parasite is incredibly important — otherwise, Winzeler explains, “you are just kind of feeling around in the dark.”

“You don’t know how your compound is actually killing the parasite, all you know is you give it to the parasite and the parasite dies,” she says. “It’s always a race between the parasite and what you’re using to try to kill it and we don’t have a particularly good vaccine at this point.”

According to the 2017 World Malaria Report global malaria control has stalled. In 2016, there were an estimated 216 million cases of malaria, which was an increase of 5 million cases from 2015. That’s the first uptick in malaria cases in a decade, and it resulted in the deaths of 445,000 people.

“Malaria remains a huge killer,” says Winzeler. “We need new tools, approaches, and to continue to invest heavily in malaria control, or else it most likely will come back.”

Abstract: A team of researchers has identified numerous mutations that allow the malaria-causing parasite Plasmodium falciparum to become resistant to treatment. Knowing the identity of genes that impart multidrug resistance is important for the design of new drugs, and for understanding how existing therapeutics can lose their efficacy in clinical settings. Worldwide, hundreds of thousands of people die from malaria each year, and the recent evolution of drug-resistant strains of the parasite in Southeast Asia is now intensifying the need for novel treatment options. To better understand how the parasite develops resistance to different drugs, Annie Cowell et al. performed a genome analysis of 262 Plasmodium falciparum parasites resistant to 37 groups of compounds. In 83 key genes that are associated with drug resistance, the researchers identified hundreds of changes that could be mediating this effect, including repeated genetic coding or mutations resulting in altered proteins. The team then used clones of well-studied P. falciparum parasites and exposed them to the compounds over time to induce resistance, monitoring the genetic changes that occurred as resistance developed. Remarkably, they were able to identify a likely target, or resistance gene, for every compound. In particular, Cowell et al. identified mutations that repeatedly occurred upon individual exposure to a variety of drugs, meaning that these particular mutations are likely mediating resistance to numerous existing treatments. Jane Carlton provides more context in a related Perspective.

More like this
Science
Feb. 4, 2023
How Scientists Decide Whether Everyday Products Could Cause Cancer
By The Conversation and Brad Reisfeld
Science
Jan. 28, 2023
Viruses can speed up atypical brain aging — vaccines may offer peace of mind
By Andrew Bubak, Diego Restrepo, Maria Nagel and The Conversation
Science
Feb. 4, 2023
The Weirdest Sci-Fi Apocalypse on Netflix Reveals a Controversial Field of Medicine
By Tara Yarlagadda
LEARN SOMETHING NEW EVERY DAY.
Related Tags
Share: