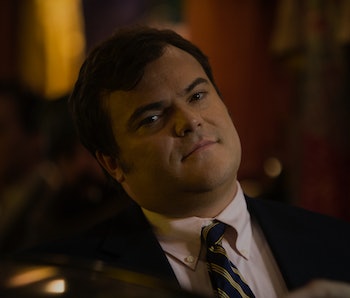 Because it is about war, politics, ambition, and incompetence, The Brink invites comparisons to both Dr. Strangelove and Veep. These comparisons may be illustrative, but Strangelove and Veep were both the works of an auteur (Kubrik and the recently retired Iannucci respectively) whereas The Brink has the gloss of high pop. Showrunner Jay Roach, who directed all three Austin Powers movies, is returning to the well from which he pulled millions: We’ve got sex, international intrigue, hubris, and, more importantly, good intentions.

The show stars Jack Black as a State Department flunky with big ambitions, Tim Robbins as a horn dog Secretary of State, and Pablo Schreiber as discontented knock off of Cruise’s Maverick. Our three male leads are, like the spy who shagged me, all fundamentally good dudes. They want to avoid war by not-quite any means necessary. The question the pilot seems to posit is whether or not they can do this despite themselves. The question HBO brass will be looking to get answered is whether or not these guys are actually likable.

So far, we’re at a strong “probably.” These actors are winning enough to overcome some thin dialogue as they debate the efficacy of bombing raids, trying to save civilians, and step into the role of erstwhile spy.

But the strongest indication of where the show is going isn’t its stars, but the antagonist we only see speaking Urdu on television. The leader of a successful coup,  General Umair Zaman is a Pakistani strongman and diagnosed (this is a major plot point) crazy person. He’s got a definite “Death to America” vibe, but his politics have more in common with Dr. Evil than with Muhammad Zia-ul-Haq, the Pakistani president who rose to power by similar means. He is most concerned that American drones are actually part of a Jewish plan to render his followers impotent. The character, played by go-to Middle East character actor Iqbal Theba, requires no reckoning. He is dumb and dangerous. He represents nothing.

Given Zaman’s insanity, The Brink is structurally incapable of developing into a spoof of either Homeland or The Americans — The West Wing, maybe. Instead, we’re gonna get a show about a few moderately good men. It is Austin Powers in a bureaucrat’s suit, which is pretty promising if you’re not looking for prestige television. The Brink represents a rejection of the prestige form that defines True Detective, the show that leads into it. Whereas True D looks smart and is dumb, The Brink looks dumb. We don’t know if it will become smart yet. It might be for the best if it doesn’t.