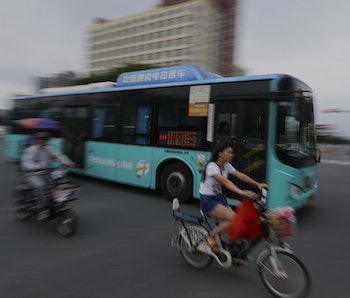 This week, the transportation commission of Shenzhen, China announced that it had electrified 100 percent of its public buses. It is the first city in the world to go completely electric with its bus system.

Shenzhen, China’s tech hub, had planned to complete the switch to electric by 2018, and has done it ahead of schedule.

Now, 16,539 electric buses serve the coastal city of 12 million. The city had already replaced more than 14,000 of the previous diesel buses.

For a sense of scale, the top six largest bus fleets in the United States have a combined 15,453 buses. Of the 65,000 public buses on roads across the country, only 300 are electric.

According to the transportation commission, Shenzhen’s fleet of electric buses will use 72.9 percent less energy than the diesel buses that they replace. This could save the equivalent of 345,000 tons of fuel every year, and lower carbon dioxide emissions by 1.35 million tons.

While other countries have also set targets to switch to electric vehicles — Norway aims to end the sale of gas and diesel cars by 2025 and Britain by 2040 — China is moving much more quickly, as the recent developments in Shenzhen show.

This is largely because of the scale of the country’s pollution problem. Vehicles in China were responsible for 44.7 million tons of pollu­tants in 2016, according to China’s Ministry of Environmental Protection.

This is not the first exciting transport-related news to come out of Shenzhen in 2017. In early December, Shenzhen Bus Group also successfully tested four self-driving buses in the city.