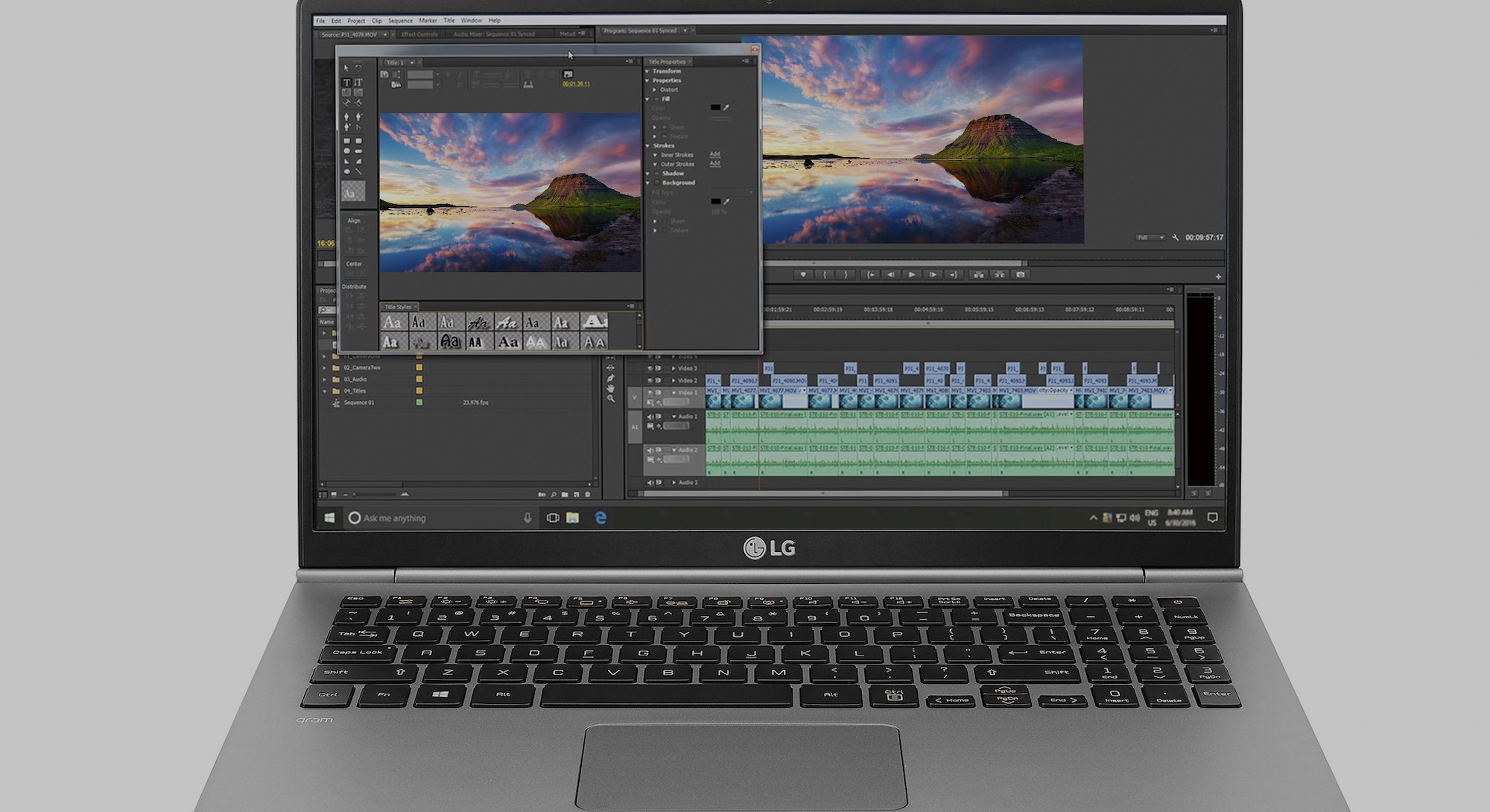 I’ve been a loyal MacBook user for going on five years. Before fully embracing a lifestyle inundated in Apple products I did my school work and played video games on a crummy desktop computer that ran Windows XP.

My only experience with Windows laptops were what I saw a couple of my friends using. They were bulky, heavy, and nowhere near as portable as a MacBook. But after using the LG Gram for a few days I have seen that all of what I thought could only be done a Mac is possible — and more — with this particular ultra-light Windows laptop.

Before I get into my experience it’s important to note that I received the new LG gram 15.6” Ultra-Lightweight Touchscreen Laptop with Intel® Core i7 processor ($1,699.99) and I’ll be comparing it to my 13.3” MacBook Pro I got in early 2015. So it’s not exactly a one-to-one comparison, but even so, I never expected to be as impressed by the Gram as I was — especially its touchscreen, something I never thought a laptop would pull off.

Let’s dive into the Gram and its specs.

Weight: The Gram really is feather-light

The very first thing I noticed was how insanely light the Gram is — the whole point of its name is that it weighs less than a gram, or about 2.5 pounds. When I unboxed it I thought I was holding an empty laptop case without a motherboard or hard drive. I was shocked and excited to start typing away on this thing.

It turns out the Gram is roughly half a pound lighter than Apple’s lightest laptop, the MacBook Air, and 1.1 pounds lighter than my laptop. That already poked a major hole in my impression of Windows laptops as either big and bulky or just too basic to be much use or much fun. This computer was sleek in a way I’d previously only associated with Apple.

The initial set-up of the Gram was a breeze. You can either do it all yourself or have Cortana, Microsoft’s Halo-inspired voice assistant, guide you through it step-by-step. With Cortana’s help, I was ready to go in five minutes, if not quicker.

One small catch is that parts of the setup require a Microsoft email address. So if you don’t have an Outlook or a Hotmail you’ll have to make one specifically for this laptop. This is so Outlook just automatically syncs to your inbox, without any further set up.

This can be a little annoying if you’re a power Google user, like myself. But luckily I had a burner Hotmail address from my early days online. Don’t judge me. Otherwise you may need to go ahead and get your own throwaway email account, if only to expedite the process.

Now I knew going into this that the screen was going to be larger and nicer than my MacBook, but never to this degree. At maximum brightness, the colors just popped so much more than they do on my laptop.

Watching Netflix and playing video games on the Gram is incredible, and it’s not even because of its specs. The graphical capabilities of the Gram can’t compared with some high-performance PCs, but then it’s not a gaming laptop. Popular games like Heroes of the Storm and Overwatch run perfectly on medium to high settings.

The Gram also maximizes the total amount of screen surface area by placing its camera directly below the the display. My MacBook’s camera is directly on top of the screen, which I assume is the main reason it has a way bigger border than the Gram.

Touchscreen: Something Apple should seriously think about implementing

Until now I’ve always thought touchscreen laptops were mostly a gimmick. Why would I need to tap the screen if I can just use the trackpad or a mouse. But once again, the Gram shattered my expectations.

Without exaggerating this might have been the best touchscreen I’ve ever used. It tracks your movements perfectly and even has that 3D-touch feature Apple made such a big deal about. That means you can open up Paint 3D — Microsoft’s new take on MS Paint — and press your finger down to make big blotches of ink or lightly swipe your finger to create thin lines of virtual ink.

The touchscreen is even pretty useful for just browsing. I’m in bed half of the time I’m using my laptop, so having the freedom to just tap something on the screen is a whole lot easier than having to reach for the trackpad and find the cursor on the screen.

Unfortunately, you can’t go full touchscreen. There is no virtual keyboard built into the operating system, so you still have to type things using your physical keyboard. It would be absolutely amazing if you could fold the Gram over on itself and use it as a giant touch pad.

My Issues: The audio and the brightness/volume controls

The laptop’s audio was surprisingly bad. Dropping the volume too low will make things almost completely inaudible. Turn it up too high and the quality of sounds becomes frustratingly distorted and staticy. For having such a stellar display, it was disappointing that the speakers were such a letdown.

Unlike my MacBook, which lets me quickly toggle my volume and brightness with the touch of a button, it’s a little more complicated with the Gram. You have to hold down a key near the Ctrl button and then reach for another key. This makes it so you can’t toggle your volume or brightness with one hand. Unless you have some really long fingers.

At first I thought it would be struggle to incorporate the Gram into my daily routine, but after only a couple of days I couldn’t wait to get home and watch YouTube videos and play games on it. LG incorporated a lot of the things you would expect from an Apple product, like the touchscreen and how lightweight it is, and they might have even pulled them off better.

Considering it’s in a similar price range as the latest MacBooks, has a touchscreen, and can run a ton of games, I’d definitely be interested if I was in the market for a new laptop.