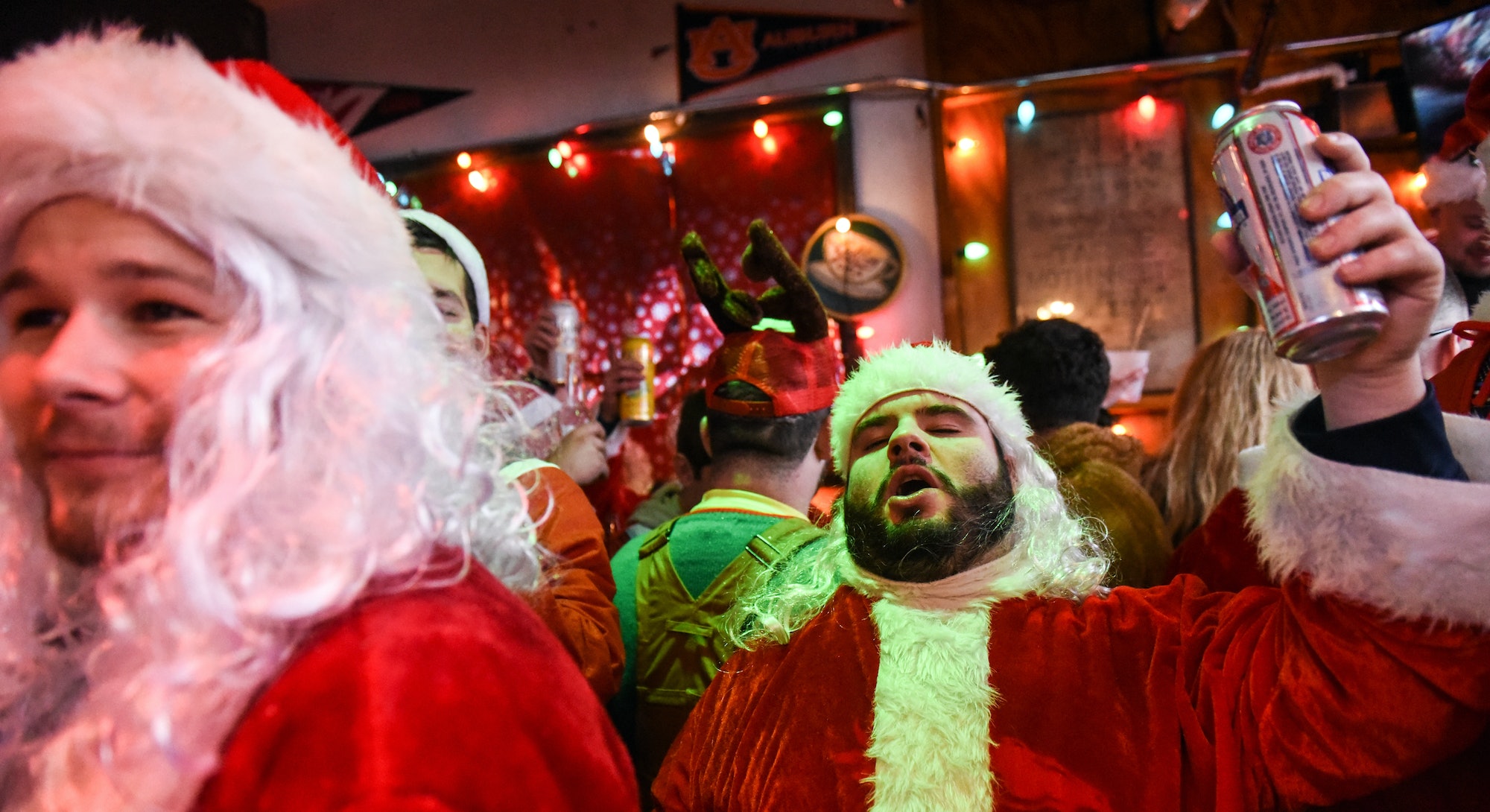 All over the world, boys and girls spend the holiday season sending their Christmas lists to St. Nick and dreaming of what they’ll find under the tree. The adults, meanwhile, are most likely getting drunk. And why not? It’s a time to eat, drink, and be merry — and also a time to tolerate extended family by getting tipsy. Holiday cheer comes in several different recipes, so let’s explore some of the most interesting ways to booze from near and far.

You think your office holiday party gets wild? Try attending a Scandinavian Julebord. The parties, thrown in countries like Norway, Sweden, and Denmark, are famous for their buffets offering traditional foods and lots of booze. The Julebord has its roots in the Middle Ages, when food was left out for the poor during the cold months. Now, they are typically thrown by employers for employees and families, or by sports teams or social clubs. The parties often last through the night and it’s not only okay to get drunk, it’s expected.

Feuerzangenbowle translates to “fire-tongs punch,” so you can bet that this tradition involves lighting something up. Typically, a bowl of dry red wine spiced with cinnamon sticks, star anise, cloves, and orange peel is heated over a burner, similar to a fondue-pot. A cone of sugar, 7 inches in length, is placed above the bowl. Originally, it rested on a pair of tongs (hence the name), but someone figured out a metal grate is much more stable. The sugar cone is then doused in rum and set on fire, leaving the sugar caramelize and drip into the bowl of wine. This German holiday tradition has been around for decades but got a big boost in 1944 when a movie with the same name came out. The film gained cult status in the 80s, and now many German college students have Feuerzangenbowle parties à la The Big Lebowski and White Russians in the US.

Speaking of lighting things on fire, let’s turn now to a beloved moment in Charles Dickens’ A Christmas Carol:

“In half a minute Mrs. Cratchit entered – flushed, but smiling proudly – with the pudding, like a speckled cannon-ball, so hard and firm, blazing in half of half-a-quarter of ignited brandy, and bedight with Christmas holly stuck into the top.”

The speckled cannon-ball is none other than a traditional Christmas pudding. Christmas puddings of yore were more of a mince pie, but by the 19th century they evolved into the sugary raisin and spice cake we know today. Before being served, a ladle of rum, brandy, or whiskey is heated and set on fire, then poured over the pudding. This tradition, known as “flaming the pudding,” is said to represent the passion of Christ. But in the 17th century, Oliver Cromwell banned the practice, believing it to be based in pagan ritual. Thankfully, the flames didn’t stay out for long.

If you travel below the equator for the winter holiday, you’re going to want to ditch the hot cocoa in favor of something chilled. In Chile where the December temperature is around 80 degrees Fahrenheit, the Christmas cheer of choice is the Cola de Mono: a chilled mix of coffee, milk, sugar, aguardiente (anise liquor) or brandy, cloves, and cinnamon.

That’s right, coffee and alcohol in one cup! There’s no official record on where the name, which means “Monkey Tail,” derives from, but a popular theory is that it was a misnomer for “Colt de Montt,” as in the Colt 45 revolver belonging to Chilean president Don Pedro Montt Montt, who served from 1906-1910. The story goes that the Pres was at a party and got tired. He asked someone to retrieve his gun so he could leave (all weapons were checked at the door), but not wanting the party to end, the host mixed up a pitcher of cafe con leche with aguardiente and served that to Montt Montt. What that has to do with Christmas, again, no one seems to know. But that doesn’t make the Cola de Mono any less delicious!

By now, you’ve probably heard of Krampus, the horned, cloven-foot demon who shows up in December to whip bad children before stuffing them in his sack to carry them to the underworld. But did you know there’s a whole street festival dedicated to the demon? Krampuslauf, which literally translates to “Krampus run.” involves hordes of Krampus-costumed individuals lighting torches and partying in the streets, fueled by schnapps. Sounds terrifying. Though the tradition started in Eastern Europe, it has now spread to other parts of the world including the United States, so keep an eye out for drunk goats trying to stuff you into a bag.

Grown-ass adults have been dressing up in Santa costumes and going on pub crawls (which often lead to public vomiting) since 1994. Inspired by a Danish political activists who mobbed a Copenhagen Department store before Christmas, the first SantaCon was held in San Francisco by the Cacophony Society. There are now SantaCons all over the world, with the largest held in New York City and drawing tens of thousands of people dressed in red suits and beards. Most SantaCons raise money for charity, but that good is often overshadowed by the drunken debauchery that ensues (despite organizer’s warnings: Being drunk &/or disorderly in public will tarnish Santa’s reputation. One bad santa can ruin things for an entire location because we’re all dressed the same, duh.).

Wassail refers to a drink of hot mulled hard cider, and Wassailing involves getting drunk off the stuff while singing and banging on pots. What’s with all the noise? The reasoning behind the tradition has to do with an old pagan ritual that involved warding off evil spirits and awakening the apple trees to ensure a good harvest. The more noise (and possibly more face paint you wear), the better chance you wake the trees up! Wassailing typically happens during the celebration of Twelfth Night–January 5th. But Wassail can be enjoyed all season long.