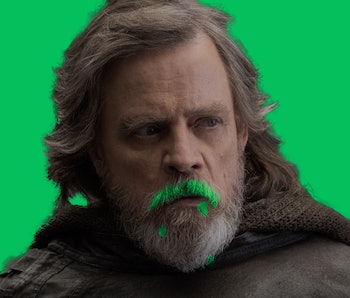 The Luke Skywalker we meet in Star Wars: The Last Jedi is not the hero that fans grew to know and love in the original trilog. Even Mark Hamill has some harsh thoughts about how the optimistic rebellion hero and Jedi master turned into a cranky, despondent hermit.

One Last Jedi scene, in particular, seemed to illustrate how far Luke had fallen, and how few fucks he had left to give. While Rey was following him around Ahch-To, Luke knelt down before a gross creature known as a thala-siren, drew close to its four upsettingly human-like breasts, applied pressure to a teat, and filled up a container with frothy, raw, green milk. Then, he gulped the presumably still warm milk down with relish, making deliberate eye contact with Rey.

It’s a gross moment, that’s for sure. When we first met Luke back in A New Hope, he was an innocent farmboy who drank blue milk with his aunt and uncle. It was something a civilized human being would do, and there appeared to be some sort of refrigeration involved.

In The Last Jedi, though, he’s not loving served (presumably) pasteurized blue milk by his dear Aunt Beru. He’s walking over to a chill-as-hell thala-siren, grabbing a nipple, and going to town, aggressively pounding the beverage.

Here’s the thing, though: As weird as this scene is, it’s not even close to the grossest thing we’ve seen Luke do on screen. To start with, even though his behavior was strange, people can drink raw cow milk, though it’s advised against as there can be bacteria that the pasteurization process would otherwise eliminate. But, this movie also contains a scene where the Force allows somebody to survive the vacuum of space, so raw milk probably isn’t a big deal for Luke.

However gross the green milk scene is, it pales in comparison to a moment in The Empire Strikes Back when Luke’s entire-ass body gets shoved into the gory body cavity of a freshly dead tauntaun.

The Wildlife of Star Wars: A Field Guide, states that the native Hoth species are repomammilian herbivores. They give birth to live young, and according to the book, “mothers are able to regurgitate a form of milk from their crops if necessary” to feed their babies. Male tauntauns also have this “milk,” but they use it to spit when they’re annoyed.

So, if milk is the thing we’re worried about, there’s almost certainly vile tauntaun milk swarming around Luke when he’s inside of the slain tauntaun’s belly (it’s unknown if Han’s mount was a male or female, but it doesn’t matter since they both had milk). Not to mention that there’s also entrails and blood and all sorts of horrifying innards all up in Luke’s business as well.

Granted, Luke didn’t choose to crawl inside of a dead tauntaun. Han made that decision for him, since he thought the residual warmth was the only way to keep Luke alive through a cold Hoth night. But, if Luke remembers any of that experience despite his grievous wounds and potential frostbite, then it probably changed him. Once you’ve literally been in the belly of the beast, what’s the harm in chugging green milk straight from the four-breasted source?