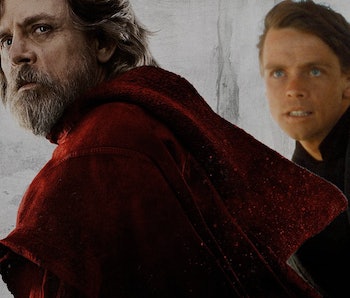 Some longtime Star Wars fans are upset that the latest movie, Star Wars: The Last Jedi, seemingly ruined Luke Skywalker. When we left him at the end of Return of the Jedi he was a triumphant Jedi master with a promising life ahead of him. Last Jedi reveals that it all fell apart, and he’s a broken hermit who drinks still-warm green milk fresh from the teat. Mark Hamill, the actor who has played Luke since the beginning, was also a little bothered by what happened to his character, but it’s understandable, and he’s actually being a good sport about it.

In a press junket interview that’s making the rounds, Hamill doubles down on his pre-release comments that he “fundamentally disagreed” with the decisions director Rian Johnson made about Luke.

Here’s Hamill in the new interview, which you can watch below on YouTube:

I said to Rian, ‘Jedi don’t give up.’ I mean, even if he had a problem, he would maybe take a year to try and regroup. But if he made a mistake, he would try and right that wrong. So, right there we had a fundamental difference, but it’s not my story anymore. It’s somebody else’s story — and Rian needed me to be a certain way to make the ending effective. …That’s the crux of my problem. Luke would never say that. I’m sorry. Well, in this version, see, I’m talking about the George Lucas Star Wars.

“This is the next generation of Star Wars, so I almost had to think of Luke as another character,” he continued. “Maybe he’s Jake Skywalker. He’s not my Luke Skywalker, but I had to do what Rian wanted me to do because it serves the story well.”

You know what? It’s totally cool that Hamill isn’t too jazzed about what happened to the iconic, beloved hero he played in the original trilogy. The big themes of The Last Jedi had to do with hope, learning from failure, and passing the torch on to the next generation. To do that, and to have it mean anything, the old generation needs to falter and move on. It’s not the happy ending they thought they were getting decades ago, but as The Last Jedi goes to show, nothing really ever ends.

Even for fans who loved the bold direction Last Jedi took in the series, seeing your heroes at their lowest stings. It must sting even worse for Hamill, as he is that original hero who so tragically failed. For Hamill to pine for the halcyon days of Return of the Jedi, when all Luke had ahead of him was optimism and unknown potential, is only natural.

But Hamill is also a professional actor, and he’ll readily admit that The Last Jedi isn’t about him, which is nice.

“I still haven’t accepted it completely. But it’s only a movie,” Hamill said. “I hope people like it. I hope they don’t get upset, and I came to really believe that Rian was the exact man that they need for this job.”