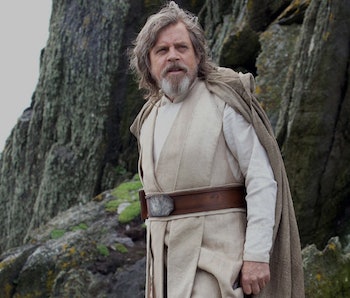 Mark Hamill, the actor who has played the one and only Luke Skywalker in five Star Wars movies, is a troll in real life. It’s amazing. All throughout the lead-up to the Last Jedi’s premiere, the actor would post trolling tweets making fun of everybody’s obsession with learning spoilers. Hamill’s presence on Twitter is great — because it’s the internet, he’s not really there, but he’s around, able to appear and inspire or antagonize in a pithy 280-character message.

Hamill’s online persona might actually be pretty close to what we can expect from Luke Skywalker going forward.

This post contains spoilers for Star Wars: The Last Jedi.

At the end of The Last Jedi, Luke becomes one with the Force after projecting a semi-ethereal version of himself across the galaxy to distract Kylo Ren and the First Order, allowing the good guys to escape. As with Obi-Wan and Yoda before him, Luke is “dead,” with nothing but an empty cloak left behind, but is he gone? Not necessarily. We’ve certainly seen Force ghosts before (heck, Yoda was in the movie), and Luke did tell Kylo “see you around, kid.” which could be both a promise and a pretty great troll.

“I don’t know what’s gonna happen in Episode IX at all, but there’s actually more potential for more interesting things in terms of his role in the final chapter if he moves into another realm,” director Rian Johnson told SlashFilm, prompting interviewer Peter Sciretta to posit that Luke could return as a “Force ghost haunting Kylo Ren.”

It’s fascinating, isn’t it? A lot more fascinating than him just tagging along with our heroes with a lightsaber. So to me, it opened up more potential and it seemed like having a full film that is Luke’s journey…it seemed like if there’s any place in the trilogy where it’s gonna have the most potent place, it would be here. But believe me, I wasn’t looking forward to doing it.

Given that Han died in The Force Awakens, and Carrie Fisher’s death means we won’t be seeing much (or possibly any) of Leia in Episode IX, Luke is the only human character from the original trilogy who could make another appearance in the saga’s final chapter. It seems only fitting that he’d make some appearance as the story draws to a close, and Johnson’s not ruling out the possibility that Luke will offer Rey guidance and antagonize Kylo Ren.

The No. 1 rule about being online is that you shouldn’t feed the trolls. As a Force ghost, Luke could totally get under Kylo’s skin, and Ben Solo isn’t mature enough to rise above his spectral mentor’s righteous taunting.