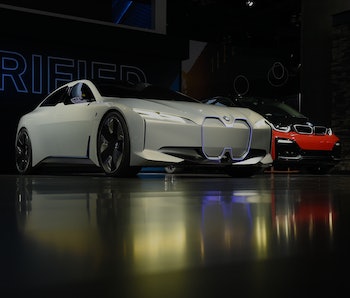 BMW’s electric car efforts got a big spark on Monday, when solid state battery developer Solid Power announced a new partnership that will see the pair working to create the next generation of rechargeable vehicles. If their efforts are successful, it could beat out the likes of the Tesla Model 3 that uses regular lithium-ion batteries.

“Companies like Tesla and Northvolt are using conventional Li-ion cells based on flammable liquid electrolytes,” Josh Buettner-Garrett, Solid Power’s chief technology officer, tells Inverse. “This is the best option available to those companies today, but solid-state batteries such as those being developed by Solid Power will offer improvements in safety, amount of energy stored, and battery pack simplicity. These improvements will lead to longer driving range and/or reduced cost for electric vehicles.”

With the partnership, the BMW Group will work with Solid Power to advance the technology to a stage where it can be used in an electric vehicle. Solid Power’s batteries use “proprietary inorganic materials” to achieve longer battery life, higher maximum temperatures, and further range. With the entry-level 2018 Nissan Leaf packing a range of just 150 miles, a breakthrough in range could help encourage more consumers to switch from gasoline.

While they sound good on paper, solid state batteries are still in their infancy. SolidEnergy, a firm spun out of MIT in 2012 that’s developing its own solution, opted to use a combination of solid and liquid electrolytes as they found an all-solid design does not conduct ions as well as its liquid counterpart.

Tesla, which is currently building a giant lithium-ion battery factory in the Nevada desert called the Gigafactory, has not made any public announcements about a switch to solid state, and previous comments from CEO Elon Musk suggest that the issue lies in getting such new technologies to work outside of a theoretical setting.

“There are some breakthroughs that I think are achievable,” Musk said during a Tesla conference call in August. “They’re confidential, so I can’t talk about them on this call, but there’s one particular avenue that I am confident could be made to work that would be the most significant breakthrough in a while. But again, you’ve got to make it work in the lab.”

If BMW can make it work in the lab, it could be onto a winner.