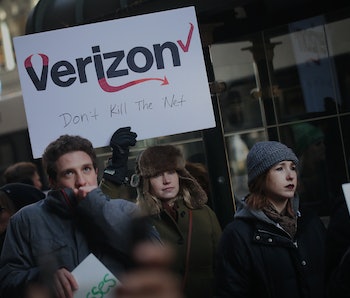 The Federal Communications Commission voted Thursday to end net neutrality, giving internet service providers unprecedented power to control our experience online. So what do telecommunications giants like Verizon, AT&T, Comcast, and Charter have to say for themselves now that they have officially been handed the keys to the internet kingdom?

Those four companies are the ISPs for about 76 percent of the 94.5 million internet subscribers in the United States. And when about half of all households only have access to a single provider, these companies hold enormous power in shaping an internet without net neutrality, the previously longstanding principle that ISPs could not set up a tiered internet of slow and fast lanes, throttle access to certain content, or charge either consumers or sites more for preferential access.

Under FCC Chairman Ajit Pai’s plan, all the ISPs have to do now is be transparent in their dealings with consumers. So let’s get the transparency ball rolling by checking in with the big four ISPs the day after the ruling.

Here’s the short version: According to the ISPs, they support net neutrality, and Thursday’s ruling won’t change how they operate. A common objection is essentially one to do with process. The Obama-era FCC’s 2015 decision to reclassify ISPs as utilities instead of content providers was an act of regulatory overreach, this argument goes, and the better way to preserve net neutrality is for the U.S. Congress to enact such protections legislatively.

In a post titled “It’s Time For Congress to Act and Permanently Preserve the Open Internet,” Comcast Senior Vice President David L. Cohen laid out this case. Here’s a section from the full blog.

It’s now time for all of us to take advantage of this moment in time and end the cycle of regulatory ping pong we’ve been trapped in for over a decade and put this issue to rest once and for all. And there’s a simple way to do this — we really must have bipartisan congressional legislation to permanently preserve and solidify net neutrality protections for consumers and to provide ongoing certainty to ISPs and edge providers alike.

The Internet is at the core of America’s digital innovation and technological advancement. It is too valuable to be trapped in the middle of a never ending game of politics and regulatory arbitrage depending on the party in power. We should stop the litigation and legislative threats by the party not in control of the FCC. We need bipartisan congressional legislation to protect the Internet and consumers. Now is the time for both sides of the aisle to come to the table, have a civil discussion, and produce a legislative product that enshrines durable and enforceable net neutrality rules.

Cohen and Comcast have a point here, in isolation: It’s not productive for the FCC to keep going back and forth on its net neutrality policy depending on whether a Democrat or a Republican is in the White House. A legislative solution would be better, and it’s worth asking why the Democrats, the country’s theoretically progressive party, didn’t get around to sorting this out when they had both the White House and overwhelming majorities in both the House and Senate during the first two years of Barack Obama’s presidency.

But Comcast elides its own role and that of fellow telecommunications companies in lobbying for Thursday’s ruling. The Center for Responsive Politics reported anti-net neutrality lobbying has totaled $110 million in 2017 alone. Ajit Pai and Donald Trump might be the primary political architects of this decision, but the ISPs were not mere spectators in the regulatory ping pong game.

I’m not necessarily looking to pick on Comcast specifically here — if anything, they deserve a small sliver of credit for posting the most detailed response to the ruling, even as it paints a decision it played an active role in bringing about as merely the latest chapter in the endless struggle between political parties.

Indeed, AT&T echoed many of Comcast’s points in this statement on its Public Policy site, which is included in its entirety.

“For more than a decade, under both Republican and Democratic Administrations, AT&T has consistently made clear that we provide broadband service in an open and transparent way. We do not block websites, nor censor online content, nor throttle or degrade traffic based on the content, nor unfairly discriminate in our treatment of internet traffic. These principles, which were laid out in the FCC’s 2010 Open Internet Order and fully supported by AT&T, are clearly articulated on our website and are fully enforceable against us. In short, the internet will continue to work tomorrow just as it always has. Despite the existence and the enforceability of all of these commitments, we have, since 2010, also repeatedly called for a non-Title II legislative solution that would make these consumer protections permanent. We continue to support a legislative solution and will work with any interested members of Congress to achieve that solution.”

Verizon spokesman Rich Young gave Inverse this short, simple statement on the FCC ruling: “Verizon fully supports the open Internet, and we will continue to do so. Our customers demand it and our business depends on it.”

That statement reiterates a key tenet of Pai’s justification for his plan: Consumers demand net neutrality, so therefore the free market will incentivize ISPs to maintain it even in the absence of regulations. The big, unanswered question here is whether the internet can truly operate like a free market when, again, half of households have only one option for their ISP.

Charter directed Inverse to this official statement, in which it points to increased investment as a key reason it supports the FCC’s ruling.

This is why Charter also supports Congress pursuing bipartisan legislation that enshrines an open internet into law and spurs broadband deployment and investment. Such legislation would provide permanent regulatory assurance and create an environment that allows for more long-term planning that will help us continue to provide even better broadband across our country.

Charter recognizes this debate has stirred passions. But in the days and weeks ahead, we hope our customers remember two things: 1) we will continue to provide them with a superior broadband service that includes an open internet; and 2) by bringing internet regulations into the 21st century, we can ensure more future innovation, improvement and availability of our broadband.

Its full statement is here.