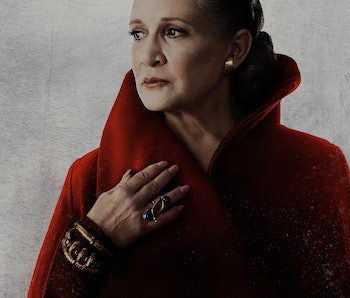 There are a lot of twists in Star Wars: The Last Jedi, and some of them involve beloved characters and happen, very, very early.

With that in mind, let’s talk about Leia’s big moment, arguably the biggest surprise of the film.

This post contains major spoilers for Star Wars: The Last Jedi. Seriously, don’t read past this unless you want one of the coolest, weirdest moments in Star Wars history to be totally ruined.

Kylo Ren’s breathtaking anger and shame lead him on the warpath. Two TIE fighters follow in the wake of his TIE silencer, and after ripping their way through the Resistance fleet’s hanger bay, Kylo and his soldiers barrel toward the Resistance bridge.

General Leia Organa is on the bridge with her command team and, in that moment, Kylo realizes he’s incapable of killing his mother; he hesitates and then his thumb pulls away from the trigger.

But the TIE fighters fire anyway. It’s a direct hit.

Leia is pulled into the cold vacuum of space.

The camera pans elsewhere, but we do eventually return to Leia. Frost gathers on her skin as she floats through empty space. Her hand twitches, the music swells, and Leia Organa uses the Force to fly through space and return to the ship.

Let’s talk about what the fuck happened there.

The initial moment when Leia is sucked out of the command ship with countless other high ranking officers receives very little fanfare. In fact, it’s so sudden and casual that you might have stopped breathing and thought it was a fake-out. There’s no way that’s how Leia’s story ends, right? Right.

So, Leia’s a full-on Force user now. In Star Wars: The Force Awakens, Leia felt Han’s death through the Force, but there’s a difference between sensing major changes in the world through the Force and then using it to save yourself from certain death.

This isn’t totally unprecedented (because, honestly, what hasn’t been done at some point or another in Star Wars?). In the non-canon Star Wars novel Dark Nest III: The Swarm War, Leia becomes a full-fledged Jedi Knight after having gone through training at Luke Skywalker’s new Jedi Academy. She’s a powerful Force user and regularly kicks ass and takes names. As mentioned, though, this series is outside of the accepted Star Wars canon — The Last Jedi is the first time we see Leia use the Force so actively in canon.

Poe Dameron and the rest of the Resistance didn’t… really seem to question Leia’s powers? In fact, they seemed downright chill with it, suggesting that she’s exhibited some powerful Force connections in the past. Obviously, the galaxy knows Leia is Luke Skywalker’s twin sister and Darth Vader’s daughter, but it seems Leia’s Resistance is used to her Force abilities being more than a passing connection.

Now, the question is: how much of Leia’s power will we see again? Was this a one-time thing, just one of the amazing twists peppered throughout The Last Jedi and something to make audiences everywhere scream in delight? While Leia’s fate in Star Wars: Episode IX is a bit of a mystery considering actress Carrie Fisher’s tragic death in December 2016, Leia obviously didn’t die in The Last Jedi.

Maybe we’ll see Leia’s powers again in the near future. Lucasfilm has said that it don’t plan on digitally recreating Fisher’s image for Episode IX, which means there might be some leftover shots of Fisher that were unused in The Last Jedi that we could see in Episode IX. She might use her Force abilities then. Or, maybe, we’ll see Leia use her powers in a Star Wars animated series. *Star Wars Forces of Destiny is a female-focused Star Wars series that’s already shown a younger Leia doing her thing.

Maybe fans will be treated to Leia’s badass Force powers once again — we just don’t know if it will be on the big screen.

Star Wars: The Last Jedi is now in theaters.

When you get burnt by Princess Leia, you stay burnt.