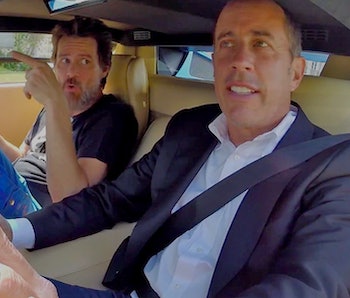 Jerry Seinfeld and Jim Carrey want to be friends. They might even use the “F” word behind each others back — as showbiz types are prone to do. But here are two people with drastically different world views. Carrey is authentically zany, but also like a big questions guy. Seinfeld is kind of asp-y and has the tiniest questions in the world. When they talk it goes (to creatively paraphrase) something like this:

Carrey: Fundamentally, we’re all made of the same materials and part of a larger system?

Carrey: We are all just zits on the face of God.

The tension in the episode of Comedians in Cars Getting Coffee featuring Carrey is a masterclass in suspense. Is Seinfeld going to get annoyed. Well, he gets pretty close, sighing through some of Carrey’s monologues (it seems like the video editor did some serious cutting). He’s open to Carrey’s ideas about identity, especially the ongoing war he says he’s raging against a petty version of himself, but he’s also Seinfeld. He’s clearly annoyed that Carrey doesn’t want to talk to him about orange juice pulp. That moment is evidence that both Seinfeld’s and Carrey’s humor came from a personal place, but also that they probably shouldn’t hang out.

Fundamentally, the episode plays out like banter between NYC and LA. LA is wearing capris, enjoying a cleanse, and thinking big thoughts (hopefully not about vaccines). NYC is making jokes and being stressed. In the end, LA takes NYC to his art studio and shows him his paintings, which are terrible. NYC smiles and nods and tries to enjoy the whole thing. After all, LA’s life seems super pleasant.

No one wins and no one comes across particularly well. Viewers will have to decide who they prefer, but, again, LA is wearing capris.

Oh, and “You are one of the few guys who is not handicapped at all by not speaking,” may be the best backhanded compliment every given. Long live Seinfeld and long live New York.