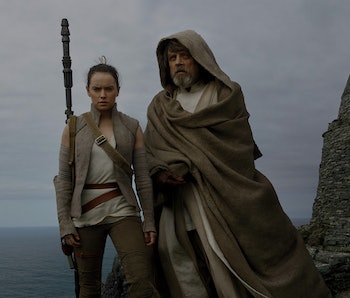 The latest entry in the Star Wars saga, Episode VIII — The Last Jedi, is finally here, and with it has come an overwhelmingly positive outpouring of reviews for the latest adventure. If early reviews — which were unleashed Tuesday at noon — are any indication, than The Last Jedi is a touching, gripping, funny, charming, and potentially devastating story on par with the greatest stories the franchise has ever told.

Yes, it’s probably everything you hoped it would be and more.

The following roundup of reviews does not contain any specific spoilers for Star Wars: The Last Jedi.

As the middle entry in the new franchise, The Last Jedi sort of has to have a series of twists that complicate what we expect for the rest of the trilogy. The Empire Strikes Back did as much with its lineage revelations, dismemberment, and people freezing.

Rest assured, while the plot does resemble The Empire Strikes Back in some capacity — not unlike how The Force Awakens bore a striking resemblance to A New Hope — most reviewers agree that The Last Jedi offers an exciting story full of shocking surprises.

Many outlets are calling The Last Jedi the best Star Wars movie we’ve gotten in many years. Granted, it wouldn’t need to do much to surpass the prequel trilogy, but chances are high that for many people, The Last Jedi will be better than even Return of the Jedi. Its only competition might be the original middle movie, The Empire Strikes Back.

Writing for The Daily Beast, Ira Madison III called The Last Jedi “the best ‘Star Wars’ movie in decades,” remarking how well it captures the original spirit of the franchise: “it’s fun, it’s kind of all over the place, but it’s dripping with emotion and pathos and, most importantly, it tells a hell of a story.”

Director Rian Johnson allegedly spends much of the film dissecting Luke Skywalker’s fractured psyche. The former hero of that galaxy far, far away was so broken after Ben Solo betrayed him and destroyed the new Jedi Academy that he retreated into self-imposed exile. New characters like Rose Tico are a welcome addition, and Poe Dameron is able to take center stage after being mostly sidelined in The Force Awakens.

“There are many familiar beats to The Last Jedi,” Madison writes, “but they’re done with such aplomb, such reckless abandon, that they feel not only fresh but absolutely fucking awesome.”

Scott Meslow, writing a spoiler-free review for GQ, mentions how whereas J. J. Abrams delivered a “safe” film in The Force Awakens that was sort of paint by numbers, Rian Johnson’s The Last Jedi plays it a bit more adventurous. Characters like General Hux and Supreme Leader Snoke are “vastly more interesting.”

Meslow even came to love the porgs. gasp

The Force Awakens gave Harrison Ford the opportunity to provide Han Solo with a fitting send-off, making him a focus in that film. Here, in The Last Jedi, “both Hamill and Fisher are given the opportunity to explore unexpected and compelling new sides of Luke and Leia, and both of them rise to the occasion.” The spoileriest thing Meslow offers is to say that the credits finally roll “on a scene [he] never would have expected.”

Debruge calls the final product “the longest and least essential chapter in the series,” because of shifts in tone that feel like a departure from the origins of Star Wars. “Luke is funnier than we’ve ever seen him — a personality change that betrays how ‘Star Wars’ has been influenced by industry trends.” These “trends” mean that The Last Jedi has to appeal to a wide audience — children that want associated toys, older adults wanting more from the franchise they remember from their childhood, and all the anxious millennials that fall in between.

Germain Lussier for iO9 loved The Last Jedi’s blistering pace as a thrill ride: “from moment to moment, you truly don’t know what’s going to happen next. Any time things seem to be going one direction, they don’t just zig or zag, they blast off into another dimension entirely. And it happens again and again.”

Lussier does agree, however, that the “humor can, at times, feel overboard from what we’re used to in Star Wars.” Overall, he does praise the bold new directions the film takes because of Rian Johnson: “From scene to scene Johnson is basically saying, “Look, if we can have talking slugs, laser swords, and lightspeed, why can’t I do this?” And then he does it.”

These early reviews represent just a few opinions surrounding the new adventure. Who are we kidding: Even if everybody hated The Last Jedi, you’re still going to see it opening weekend anyway.