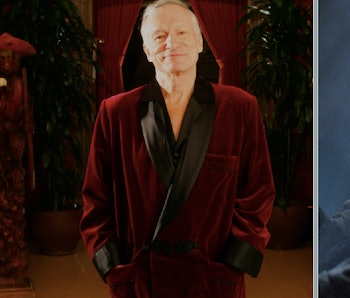 Supreme Leader Snoke, master of the Dark Side and an endless source of fan theories and speculation, is exactly like Hugh Hefner, the founder of Playboy magazine. Hey, we’re not making this stuff up. The comparison comes from none other than Snoke actor himself, Andy Serkis. So, we’re talking about a giant mansion, right? Will Snoke smoke a pipe?

On Friday, The New York Times published a massive roundtable interview with the cast and director of Star Wars: The Last Jedi. And in it, Serkis laid out what his evil character has in common with Hefner.

Referencing the “gold lamé layer” of Snoke’s robe, Serkis asserted that there’s something a little posh about this Dark Side lord. “The Supreme Leader as Hugh Hefner, that’s something that I particularly grabbed onto,” Serkis said.The luxuriousness of it all.”

Previously, Serkis has confirmed Snoke is not a Sith Lord, but that he was powerful with the Dark Side of the Force. Do Snoke’s powers include publishing a magazine? Obviously, Serkis is kidding with this comparison, but the gold robe Snoke is sporting in The Last Jedi trailers does look way fancier than anything the Emperor or Vader would wear. Maybe this slick fashion sense is making up for the fact that Lando Calrissian is supposedly not appearing in the movie at all.

Still, Serkis’s comments are likely to only pour gasoline on the fire of endless chatter about who or what Snoke is all about. And, for a good six months now, director Rian Johnson has been warning everyone to not get too excited about having their Snoke backstory questions answered in The Last Jedi. So, for now, Serkis’s detail about Snoke’s robe and the Hugh Hefner connection might have to suffice.

Star Wars: The Last Jedi premieres in theaters on December 15. Check out all of Inverse’s coverage on the film right here.