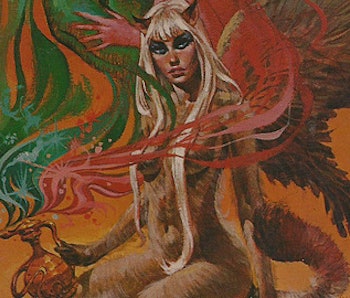 Hugh Hefner, the founder of Playboy magazine, died on Wednesday. For most, his legacy will be the creation of the biggest and most well-known adult enterprise in history: the magazine and media empire Playboy. But for readers of science fiction, Hefner’s creation will be remembered as something else: a magazine that paid really good money for short stories that would otherwise only be published in genre magazines. There was always a reason to read Playboy for the articles — the science fiction.

There’s pretty much never been a time when Playboy didn’t publish original fiction. And when it came to sci-fi, there’s a nearly endless list of famous talent. Kurt Vonnegut was interviewed for the magazine several times, Isaac Asimov contributed a slew of sci-fi and science articles, while the magazine occasionally issued anthologies like The Playboy Book of Science Fiction.

That’s right, the most famous Ray Bradbury book of them all. The cautionary tale in which books were burned in a terrible future was serialized in Playboy before its most well-known standalone novel version was published. A previous version of the story was in a small print run book from Ballantine Books, but the Playboy publication is what made this Bradbury story famous.

And that was only the beginning of Bradbury’s relationship with the magazine. His 1963 story, “The Vacation,” is an almost surrealist time-travel story containing the line “paradox flowed into paradox” in the first couple paragraphs. This yarn is vintage Bradbury. When a man takes his family on a vacation via time travel, everything isn’t what it seems and unravels everyone’s lives pretty tragically.

The first science fiction piece published in Playboy to win the Nebula Award, this story would later be published as a novella with the same title. The plot is mostly about an expedition to the upper atmosphere of Jupiter, where the main character — Howard Falcon — encounters jellyfish-like aliens who actually float around the giant gas planet.

The famous author of the novels The Left Hand of Darkness and A Wizard of Earthsea published perhaps her best short story in Playboy. “Nine Lives” is all about a space mission which is crewed almost exclusively by nine clones of each other. But here’s the rub: Some of the clones are male and some are female. Is it incest when clones do it? Le Guin doesn’t necessarily answer the question, but the story remains one of her most haunting and original pieces. Notably, Le Guin didn’t use her first name when this story was published but instead was credited as U.K. Le Guin.

This story deals with a man who awakens from a botched cryosleep while in deep space. His onboard computer — a highly advanced A.I. — is presumably there to help him, but all is not what it seems as the story continues. Not surprisingly, like much of Dick’s work, the main character gets a little paranoid in this story and has a hard time figuring out the differences between reality and fantasy. Dick later retitled the story, “I Hope I Shall Arrive Soon.”

This story — considered to be a feminist text by many — is all about someone transforming into a creature, a kind of metamorphosis somewhere between The Fly and Kafka. The author of The Handmaid’s Tale commented on the apparent contradiction of being published in Playboy in her 2011 book In Other Worlds, in which she noted that science fiction often has a “slutish reputation” when it came to public perception. Atwood made it clear that this perception isn’t fair but makes sense because of the kinds of magazines (like Playboy) that would often publish great science fiction.