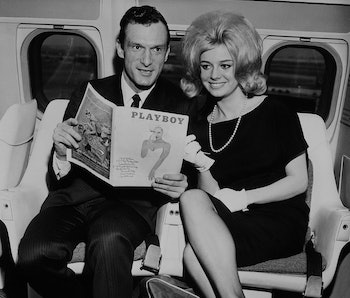 Hugh Hefner, founder of Playboy magazine and owner of a major media empire, passed away from natural causes at the Playboy Mansion on Wednesday at the age of 91. The magazine, one of the most iconic publications of the twentieth century, grew over the years to become the largest-selling men’s magazine in the world.

“My father lived an exceptional and impactful life as a media and cultural pioneer and a leading voice behind some of the most significant social and cultural movements of our time in advocating free speech, civil rights and sexual freedom,” Cooper Hefner, chief creative officer at Playboy Enterprises, said in a statement. “He defined a lifestyle and ethos that lie at the heart of the Playboy brand, one of the most recognizable and enduring in history. He will be greatly missed by many, including his wife Crystal, my sister Christie and my brothers David and Marston and all of us at Playboy Enterprises.”

Hefner, born in 1926 in Chicago to Methodist parents, joined the United States Army in 1944 after graduating from high school, writing for a military magazine. After the war, he started considering the idea that there was a gap in the market for a men’s magazine, and raised $10,000 from investors to start one.

But from day one, Hefner was clear about the magazine’s target audience.

“If you’re a man between the ages of 18 and 80, Playboy is meant for you,” Hefner wrote in the first issue. “We want to make it clear from the very start, we aren’t a ‘family magazine.’ If you’re somebody’s sister, wife or mother-in-law and picked us up by mistake, please pass us along to the man in your life and get back to your Ladies Home Companion.”

Its content faced opposition. Hefner sued the United States Post Office for its refusal to deliver copies of the magazine on the grounds that it was obscene. He won the case, and as a result he was awarded $100,000 in damages and the magazine gained the right to use the postal service.

The magazine reached its peak in 1971 when it sold seven million copies monthly, but in the following decades it struggled against a broad market of competitors. With the rise of easily-accessible pornography on the internet, Playboy removed the nude images from its magazine in 2015, only to reverse the decision earlier this year. Cooper Hefner described the decision to remove as “a mistake”:

Today, Playboy is published in over 20 countries and products with the trademark generate $1 billion in annual sales. Hefner himself holds the Guinness World Record for being the longest-running editor of a magazine.