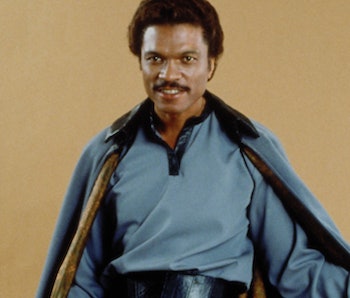 On Tuesday, Entertainment Weekly confirmed Billy Dee Williams would not return as Lando Calrissian in Star Wars: Episode VIII — The Last Jedi. But why? Director Rian Johnson told EW there was “no place in the story” for the gambler’s return. So what happened?

There are really only two options. Lando is either dead or he’s locked up in space jail by Supreme Leader Snoke and the First Order. Because, as EW pointed out, the existence of the casino planet Canto Bright in The Last Jedi should have been enough to draw the gambler and card player out of retirement. Meaning, something must have happened to Lando to prevent him from being part of the action at all.

If Lando is dead, then it’s possible he was killed by Snoke or the First Order. Lando has been known to run shady deals with corrupt organizations, meaning he could have tried to pull a scam on the First Order and the deal went bad. After all, if Han Solo ended up in a life of crime after Star Wars: Return of the Jedi, who is to say Lando didn’t similarly fall from grace?

Also, in the canon Star Wars novel Aftermath: Empire’s End, we see Lando struggling to get a birthday present for Ben Solo. Assuming Lando was a cool uncle to Ben Solo as a kid, what effect could Lando’s death have had on young Solo? In other words, could the Lando void in the new trilogy actually be a clue as to why Ben turned to the dark side and became Kylo Ren? If Kylo/Ben loved his cool uncle more than his bickering parents, it stands to reason that, sure, maybe Lando’s death was what sent him over the edge.

And hey, Kylo likes capes, and so does Lando.

It would be a bummer if Lando was dead in the new Star Wars movies, and even a bigger bummer if he was killed off screen. Meaning, the better option here is that he’s in jail and that Finn and Rose will actually end up freeing him from Canto Bright in The Last Jedi. In this scenario, Lando would be locked up in a debtors prison for gambling too hard and running out of money. It would also involve Rian Johnson lying directly to a journalist, which we’re fine with.