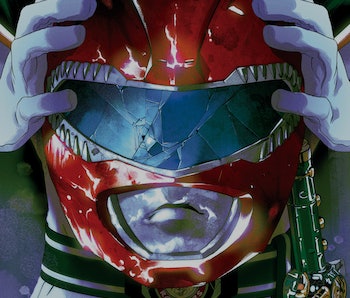 In case you’re not feeling old yet, the cult-classic Mighty Morphin Power Rangers TV series will be celebrating its 25th anniversary next year. To commemorate the milestone, the actually-great Power Rangers comics from BOOM! Studios will have its first epic crossover event in 2018. Beginning in March, Power Rangers: Shattered Grid will feature every Power Rangers team ever in a war against Lord Drakkon, the evil White Ranger from an alternate timeline.

Described as both a “celebration” of Power Rangers and the “largest story I’ve ever told” by writer Kyle Higgins, who is also known for DC’s Nightwing, Shattered Grid will see Lord Drakkon’s ambitious plans to dominate in motion. “Lord Drakkon’s plan is so much bigger than our Rangers, our world, and even our universe,” Higgins said in a statement. “The Grid is shattering, every Power Ranger in all of existence is at risk, and it’s going to take more than just the Mighty Morphin team to stand against Drakkon’s armies.”

“Over the last two years, I’ve been weaving threads in the pages of Mighty Morphin Power Rangers, all leading to the 25th anniversary of the franchise,” said Higgins, who also previously spoke to Inverse about Shattered Grid prior to its Monday reveal.

“This isn’t Civil War. This isn’t Rangers against Rangers,” Higgins told Inverse at New York Comic Con. “This is Lord Drakkon and his forces and their very ambitious desires. What the battlefronts are like, where and when, is very significant and unique. When you learn exactly what he wants, you’ll understand what the potential of this event is shaping up to be.”

In a wraparound variant cover from Deadpool artist Scott Koblish, the Mighty Morphin Power Rangers are seen karate-chopping with almost every other Power Ranger team in history. There are even obscure, Z-list teams, like the Cyborg Rangers from Power Rangers: Lightspeed Rescue and Lord Zedd’s hilarious Dark Rangers.

Mighty Morphin Power Rangers #25, the first issue in Shattered Grid, will be released on March 21, 2018.

If you liked this article, check out this video of the most insane monsters in the Power Rangers universe.

More like this
Entertainment
6.24.2022 11:15 AM
Behind the scenes at “Herogasm,” The Boys’ most NSFW episode ever
By Aaron Pruner and Jake Kleinman
Entertainment
19 hours ago
The Boys Season 3 Episode 7 release date, time, plot, cast, and trailer for the Amazon show
By Jeff Spry
Culture
6.29.2022 10:00 AM
6 years ago, Marvel released its most incoherent sequel ever
By Graeme McMillan
Related Tags
Share: