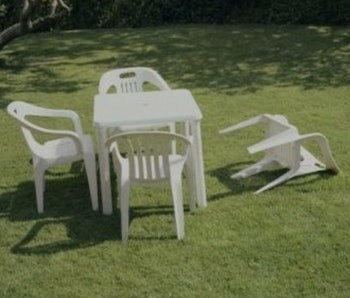 At 4:47 p.m. Eastern on Thursdasy, a 4.4 magnitude earthquake in Dover, Delaware rattled at least one part of the Eastern seaboard, mildly inconveniencing literally tens of people.

While earthquakes are pretty uncommon in this part of the country, this one was truly a blip, even by East Coast standards. Though the Baltimore Sun reports that people felt the quake “across Delaware, into the Philadelphia area, and as far away as Long Island, N.Y.,” a cursory glance at Twitter would suggest otherwise.

Not only are people bummed they missed out on the quake action, they’re viscerally angry that they didn’t feel more earth-shattering mayhem.

For some, the earthquake was both a literal shaking of earth and a metaphorical rattling of emotions.

Others were hoping for something more anarchist to come out of the uninspiring event.

In this trying time, we hope the people of the Mid-Atlantic did not drop their cell phones, pizza, or any delicate pieces of pottery. We Northeastern folk are strong — and our hearts go out to all those momentarily disturbed.

More like this
Science
Jan. 23, 2023
Earth's inner core may have stopped spinning — study
By Jon Kelvey
Culture
Feb. 3, 2023
Signs is Remembered as M. Night Shyamalan’s Alien Movie, but it Has a Human Heart
By Mónica Marie Zorrilla
Culture
1 hour ago
A Failed Sci-Fi Sequel Stunt Accidentally Set the Standard for the Forgettable Netflix Movie
By Hoai-Tran Bui
LEARN SOMETHING NEW EVERY DAY.
Share: