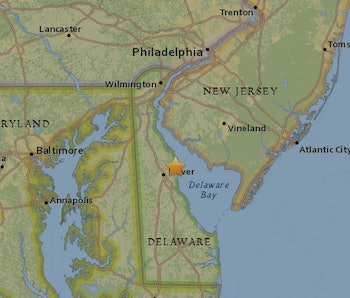 If you were anywhere along the east coast of the United States on Thursday at 4:47 p.m. Eastern time, you might have felt a slight tremor run through your body. No, it’s not just the winter chill setting in — it was a bona fide earthquake with a magnitude 4.4, which hit just 6.2 miles east of Dover, Delaware and 55 miles south of Philadelphia.

The United States Geological Survey (USGS) confirmed the earthquake in a tweet just two minutes after, at first overestimating the magnitude of the quake at 5.1. It revised its measurement to 4.4 shortly after.

On Twitter, people from Baltimore through New York city reported feeling the earth shake. “Anyone else feel their house shake?? Real rude for this earthquake to interrupt our Christmas decorating,” tweeted user karalessly from Delaware.

Descriptions of the quake, however, vary widely. In Dover, right by the earthquake’s epicenter, some said the experience didn’t last very long at all.

Earthquakes are an unusual occurrence for people along the east coast, but they’re by no means an unprecedented or even rare one. According to the USGS, some regions are more prone to earthquakes than others, and the area that felt it today is smack in the middle of one of them.

Most of North America east of the Rocky Mountains has infrequent earthquakes. Here and there earthquakes are more numerous, for example in the New Madrid seismic zone centered on southeastern Missouri, in the Charlevoix-Kamouraska seismic zone of eastern Quebec, in New England, in the New York - Philadelphia - Wilmington urban corridor, and elsewhere. However, most of the enormous region from the Rockies to the Atlantic can go years without an earthquake large enough to be felt, and several U.S. states have never reported a damaging earthquake.

The last big earthquake to rock the east coast happened in 2011 in Virginia. That one had an estimated magnitude of 5.8 and was thought to be one of the largest earthquakes to have occurred in the U.S. east of the Rocky Mountains since 1897.

It’s no surprise that Thursday’s earthquake, with a magnitude of only 4.1, barely registered on most people’s radar. According to the National Oceanic and Atmospheric Administration, the quake had a depth of 5.03 miles, and so far there is no tsunami warning, advisory, watch or threat and no aftershocks have been reported.