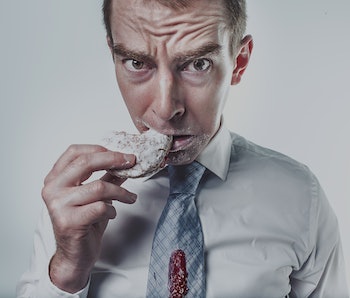 Despite the deliciousness of bread, cakes, and chips, millions of people cut these foodstuffs out of their diet in an effort to live gluten-free. Approximately one in five Americans attempt to live without gluten, the proteins that exist in cereal grains like wheat and barley, but only one in 133 Americans have actually been diagnosed with celiac disease, the inherited autoimmune disorder that causes abdominal bloating and pain when a person consumes gluten.

Yet, even people who aren’t diagnosed with the disease say cutting out gluten, from their diets has made them feel healthier anyway. This discrepancy has been a point of confusion for researchers, but a study published in Gastroenterology in early November indicates that, for many, the real pain-causing culprit is a different molecule found in wheat: namely, a type of carbohydrate called fructan. While fructans are found in grains, they are also in vegetables like onions, leeks, and artichokes.

In the paper, scientists from the University of Oslo and Monash University report that removing fructans, not gluten, eases the gastrointestinal pain of study subjects who have not been diagnosed with celiac disease. Between October 2014 and May 2016 at Osol University Hospital, 59 study participants who had already put themselves on a gluten-free diet were asked to go on a new plan.

The participants were randomly assigned into groups in which they either ate muesli bars containing gluten, fructans, or a placebo bar containing neither. After eating these for one week, they each went through a seven-day “washout period” meant to resolve any symptoms caused by the first muesli bar. The week after, they tried out a new bar containing one of the other bars.

Overall, bars containing fructans caused more symptoms like bloating, diarrhea, and constipation than the placebo bars or the ones that contained gluten. To the researchers, this suggested that it’s fructan that causes the most pain in people not diagnosed with celiac disease, not gluten.

This distinction, they write, is important not only because it can help people actually diagnose any dietary issues but also because eating a gluten-free diets when there is no need can result in an increased risk of developing type 2 diabetes.

This study supports previous research that has found that a group of compounds commonly known as FODMAPS are likely the more frequent instigator of people’s stomach pains, rather than gluten. FODMAPS is an acronym for “fermentable oligosaccharides, disaccharides, monosaccharides, and polyols” — various molecules that together make up much of the food we eat.

Fructans belong to the group of carbohydrates called oligosaccharides, which are found in sugars, starch, and cellulose. Studies have found that some people’s bodies have trouble breaking down oligosaccharides as they travel through the small intestine to the colon, which is what causes uncomfortable symptoms like gas and diarrhea.

In studies in which researchers put study participants on diets without FODMAPS, the painful symptoms generally improve. Gluten, importantly, is not part of this group of compounds — another indication that, for many, compounds like fructan are actually the problem.

While items like gluten-free bread are currently more widely available than fructan-free bread — a Mintel Research study found that the sales of gluten-free foods increase by 63 percent between 2012 and 2014 — it won’t be surprising if fructans soon become the new buzzy health word. This time, however, not eating them will actually make a difference.