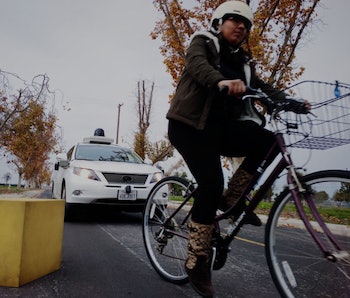 Waymo is preparing its autonomous cars for all possibilities on the road, including some gnarly boarders popping an ollie, as the kids would say. (The kids probably do not, in fact, say that.)

The Alphabet company, which announced on Monday that it’s accumulated over four million miles of autonomous driving, has been putting its vehicles through its paces with 20,000 different scenarios to make sure its cars are up to scratch. That includes skateboarders messing around in the street.

“Unique scenarios conducted on our private test track, inspired in part by what we see on public roads,” Waymo said in a company Medium post. “At our 91-acre private testing facility, we practice rare and unusual situations, such as people jumping out of canvas bags or skateboarders lying on their boards. We can also prepare our cars to handle some of the most common scenarios that lead to collisions, such as aggressive drivers barreling out of driveways.”

Waymo has been testing these vehicles at the Castle test facility, a former U.S. Air Force base in northern California designed to look like a fake city. The facility houses a number of road layouts that have given Waymo trouble in the real world, like an intersection in Texas. It’s here where the company puts its vehicles to the test.

Beyond Castle, Waymo is conducting virtual tests on simulated roadways. Around 25,000 cars are running through these simulations at any one time, and in the past year along these tests have racked up a further 2.5 billion miles of tests.

The company is edging toward its goal of providing taxi services for members of the public. In April, it revealed plans for a test program in Phoenix that offers rides in an autonomous Chrysler Pacifica minivan. Earlier this month, the company announced the project had started ferrying people around the Phoenix metro region, with plans to eventually cover an area the size of Greater London.

It’s an exciting time in the world of autonomous cars, but with Uber announcing plans to team up with Volvo to deliver self-driving XC90 vehicles over the coming two years, it may not be long before Waymo has some competition in the autonomous taxi space.

More like this
Innovation
6.24.2022 5:00 AM
Beam-steering radio technology could help autonomous cars finally hit the road
By Sascha Brodsky
Innovation
7.2.2022 6:00 PM
Are self-driving cars safe? The tipping point rests on a psychological illusion
By Jean-François Bonnefon and The Reader
Innovation
7.6.2022 9:00 AM
A single color is reason enough to buy a Jaguar XF
By Jordan Golson
Related Tags
Share: