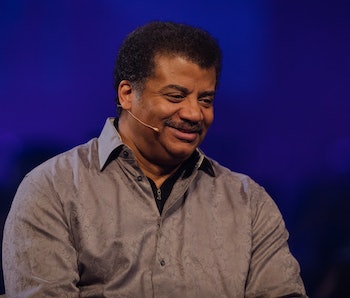 Neil deGrasse Tyson’s know-it-all attitude has become increasingly insufferable in recent months, but there’s no denying the man knows how to prove a point. The astrophysicist’s latest scientific mic drop was directed at flat Earth conspiracy theorists, a group that recently counted among its members a man who plans to launch himself into space in a homemade rocket to see for himself what the Earth looks like from above.

This man, and like-minded flat-Earthers, could save themselves plenty of time and money by taking into consideration a photo tweeted by Tyson on Sunday, which included an image of a moon with a horizontal shadow over it. The caption reads: “A Lunar Eclipse flat-Earther’s have never seen.”

It’s not the first time Tyson has gone after flat-Earthers — he famously went after rapper B.o.B. — an early big-name supporter of the movement — but this time he exercises unusual verbal restraint, to great effect.

Here, he lets the (obviously photoshopped) photo speak for itself. The major claim in flat Earth theory, of course, is that it is flat. During a normal lunar eclipse, we look to the sky to see the moon go completely dark — a consequence of the Earth’s shadow blocking light from the sun from reaching the moon. This is possible because the Earth is both spherical and huge. If the Earth was flat, the shadow it would cast on the moon’s surface when it got between the sun and the moon would, in turn, look flat, as it does in Tyson’s photo.

This, obviously, is never going to happen.

Tyson’s tactic is reminiscent of the quippy clapback fellow science communicator Bill Nye gave to flat-Earthers in April, which also invoked the use of images to prove that the Earth is not flat.

Ironically, flat-Earth conspiracy theorists and the scientifically informed public (“roundies”) reached a rare moment of consensus during solar eclipse season this past August. At the time, flat-Earth supporters argued that total solar eclipses are caused when the moon passes between the Earth and the sun — an explanation that is, surprisingly, correct.

Of course, changing a flat-Earther’s mind isn’t as simple as showing them a photo of what is (or isn’t) possible, as it’s just as easy to say a photo of the spherical Earth from space is photoshopped as it is to argue that the Earth is flat. In this case, Tyson is unlikely to change the minds of any conspiracy theorists with his photo, but he at least helps the rest of us visualize how absurd the theory is in the first place.