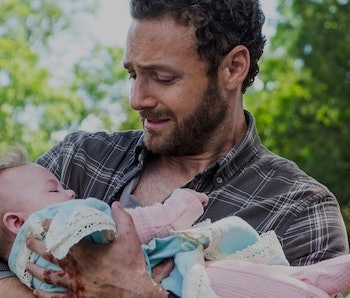 The Walking Dead Season 8 premiere included a flash-forward to a future where Old Man Rick was greeted by a young girl that called him “daddy.” In her hands was a stuffed rabbit. Then, in Episode 2, present-day Rick found and took a baby that had a similar rabbit.

But a new report about from the rabbit’s maker published in Scotland’s The Herald — previously reported by ComicBook.com from an interview with The Walking Dead prop master John Sanders — confirms that the rabbits are one in the same.

Sanders revealed to ComicBook.com that they’d initially wanted ten versions of the same rabbit for use on the show. Sanders explained the onerous task of getting the perfect rabbit for the show

“[Scott Gimple] wrote in the script, a velveteen rabbit. I went to Etsy and I looked and there were nine different velveteen rabbits but this velveteen rabbit reminded me of my childhood. Scott’s a little bit younger than me, but not much, so I showed it to him and he picked it instantly. Guess where it’s made? Scotland. And we only had six days. So I called the woman and I said, ‘I need ten of those rabbits!’ She said, ‘No.’ I said, ‘We’re The Walking Dead!’ She said, ‘No.’ Maybe she doesn’t get that in Scotland. So, I explained it to her and how much I really wanted it and what I was gonna do with it and she got really excited. She made me two rabbits.”

One rabbit was tucked into Gracie’s crib:

The other rabbit was aged up and tattered to appear in the future scenes:

If they wanted ten of the same rabbit, then that means The Walking Dead script had specific plans for the prop and had to settle for only two.

In Episode 6 — “The King, the Widow, and Rick” — Gracie was in the care of Maggie, still without her prop and had to settle for only two. Could later episodes this season have somebody retrieve the toy from the office building that had been used by the Saviors?

We still don’t know for sure whether or not Judith will survive the season or how the rabbit might factor into future episodes, but we’d all do well to keep our eyes peeled for it.

The Walking Dead Season 8 airs Sundays on AMC at 9 p.m.